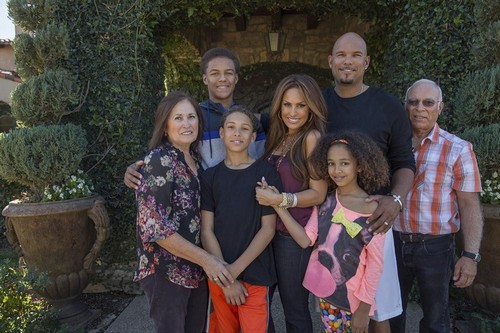 On the last episode of CWS, Larry Birkhead was shocased, he was the former boyfriend of Anna Nicole Smith who became a familiar face in the tabloids during a very long and public custody battle over his daughter with Anna Nicole. Larry resides in Louisville, KY with his daughter Dannielynn, his sister Angie, and her two children Chloe  and Justin. Also, Helio Castroneves is a three-time Indianapolis 500 champion and former ABC’s “Dancing with the Stars” champion who lives in Ft. Lauderdale, FL with his girlfriend Adriana and their daughter Mikaella . Adriana likes to keep a “perfect” home and constantly supervises the work of her housekeeper Sandra.  Did you watch the last episode?  If you missed it we have a full and detailed recap, right here for you.

On tonight’s episode, David Justice is a former Major League Baseball star who spent 14 years playing for both the Atlanta Braves and New York Yankees. Today, David lives in San Diego, CA with his wife Rebecca, their three children: David Jr., D.J., Raquel and Rebecca’s parents. Dweezil Zappa lives in Los Angeles, CA with his wife Megan and stepdaughter Mia.  Dweezil is the son of music legend Frank Zappa and began his music career as a VJ on MTV in the 1980’s. He currently tours as a professional musician with Zappa Plays Zappa. Dweezil and his family live a very “eco-friendly” lifestyle which includes walking rather than driving their car.

We will be covering tonight’s Celebrity Wife Swap, David Justice and Dweezil Zappa episode with all the details. You don’t want to miss this episode; you never know what craziness is going to break out! Don’t forget to come back to this spot at 8PM for our coverage of the episode.

David Justice is a former Major League Baseball star and he’s been married to the lovely Rebecca for the last thirteen years and they have three kids to show for it. But they do lavishly. Possibly too much for merely a family of five. They have six cars and according to self-styled King of this castle – they use all six of them.

And this lot likes to entertain. They built an “entertainment home” just so that they can have everything that would please their family and their guests. Meanwhile their counterparts live on a lesser scale. Grammy award winning musician, Dweezil Zappa, lives with his wife Megan and his stepdaughter Mia. They’ve been together for four years and only married for two so their marriage is still kind of new. Yet he agreed to swapping out his wife while still in their honeymoon stage.

Megan has certain standards. She doesn’t believe in her 12 year old daughter having a cell phone and her daughter has a share of the chores. This greatly contrasts Rebecca’s way of life. Her children actually end up being split into two groups just so each parent can always be with the kids (something Megan can’t understand). And they don’t do chores – that’s what servants are for!

So when Megan arrived at Rebecca’s – she was immediately out of place. The home was much too large and she barely received time to assimilate or at least adjust to finding her way around before David told her he was throwing a party. That meant on her first day there she had to cook for a whole bunch of strangers.

In continuing to follow the other wives’ rules, Rebecca tried to adapt to the way of life at the Zappa household, but she cracked after laundry. She was making it through the organic diet and walking everywhere on foot only to be left drying clothes on hangers outside. And that was too archaic even for her.

When it came time to change the rules, both women desperately tried to instill their own vales. Back in San Diego that meant David had to give up some of his favorite pastimes and he had to spend more time with his daughter. Usually when he and his wife spilt up their duties it would mean he would take the boys and she would take their daughter. Megan found that to be unfair to the daughter.

Although she then went on to give the kids chores. It’s a large home for sure but with three kids and a husband that’s willing to help around the house – Megan didn’t think they needed the housekeeper. And over in LA, Rebecca got rid of the chores and the walking everywhere business. She said they had a car so why not use it. Even though the first place they drove to was in fact a five minute walk.

Rebecca also gave the pre-teen of the house a cell phone and her stepdad instantly noticed a change. His daughter was on her phone every minute of the day texting. She barely lifted her head long enough to eat dinner. That’s why he created a new set of rules and Rebecca was able to concede to them.

Mia was too much into her phone and the adults sat her down to tell her what’s important in life. They told her that school work and chores must come first. Those are a must! It was alright to be excited about a new toy – they just didn’t want her to become addicted.

In the end, the Justice family valued Megan influence. It was funny watching their dad try to cook and his daughter appreciated when David did afternoon tea with her. And Rebecca brought up some interesting things to Mia. She had hired a gardener and surprisingly their garden/patio area look a thousand times better than before. So it gave them the opportunity to see that it’s ok to seek outside help.

Yet when all was said and done the two women met each other at the round table like two combatants. They each made digs about the other and thankfully started to relent (they really could have gone on for ages) when their husbands pointed out things they enjoyed during this experiment.

After the show, David spent time with all of his kids instead of just his sons and the children still have some chores. And Megan allowed her daughter to keep her cell phone. She realized that kids do need the occasional mindless pleasure.

But what I remember are the digs. Neither of these women was insulting to the other’s spouse during this whole ordeal yet they went for each other at the roundtable. Did they take what the other said as criticism or is the answer simpler? How many mothers would like their actions to be called into question by a perfect stranger?