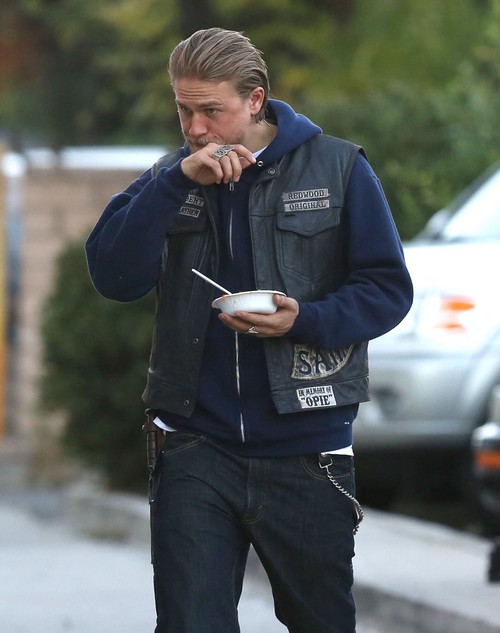 Charlie Hunnam created a mass Internet uprising when he was cast as Christian Grey for the Fifty Shades of Grey film adaptation. I mean, I haven’t seen the public unite in such a mass voice of dissent since Twilight first finished its casting of Sparkles and Lip-Biting Extraordinaire. Granted, that worked out well, but would Charlie’s casting have satisfied the fans in a similar way?

We’ll never get the chance to find out because Charlie ended up leaving the project soon after being cast. There were tons of conspiracy theories floating around as to why exactly Charlie left the project, ranging from him quitting to him getting fired. It was certainly weird that just weeks after getting cast, he left the project – and that too, it wasn’t like he had another project he wanted to do more. It was just so… sudden, right?

Well, we’re starting to get hints that maybe it wasn’t Charlie’s choice to leave the film. Maybe he really was fired from the movie, as was initially rumored. He spoke to Life & Style Magazine at a recent event, and explained, “When you put the time into something like that and a character comes alive in your mind, it’s heartbreaking not to be able to play him […] It was definitely kind of heartbreaking having to say goodbye to that character and not bring it to life.”

Universal claimed scheduling conflicts as a reason for Charlie leaving the role, but that was utter nonsense. What random scheduling conflicts popped up after they offered him the role? They would have known about his schedule for Sons of Anarchy before they made the deal, so clearly something big happened. Me thinks Universal saw all the criticism Charlie was getting online, and they just got cold feet. They decided, to heck with this, we’ll go with a pair of unknowns, much as Twilight did. Honestly, they’re probably better off that way – and so are the actors. If Charlie had done the film, even if it became a success, he would have been treated much like Robert Pattinson and Kristen Stewart were treated in the wake of Twilight; i.e., with a lot of derision and laughter.