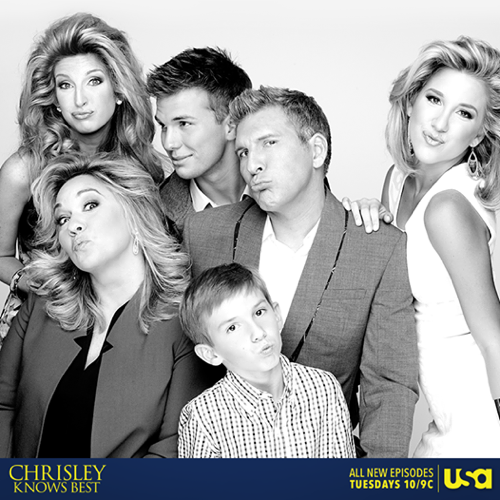 Tonight on USA Network their new reality show CHRISLEY KNOWS BEST continues with an all new Tuesday October 21, season 2 episode 3 and episode 4 called “Father’s Day”; “Confessions of a Beauty Queen”. Tonight, Todd’s competitive nature reveals itself on Father’s Day during a trip to an amusement park the Chrisley kids had planned.

On the last episode, when Julie decided to return to work, Todd had to pick up the slack at home. Did you watch the last episode? If you missed it, we have a full and detailed recap right here for you.

On tonight’s episode the Chrisley children want to plan the perfect day for Todd for Father’s Day. Also Todd and Julie decide it is time to downsize their house; the family is driven crazy.

The kids are doing a photo shoot as a father’s day present for Todd. Kyle isn’t at the shoot because he’s going through a difficult time. The younger kids are rambunctious at the shoot. “Getting all of us together is a circus, to say the least,” Savannah says.

Julie asks Savannah and Chase what their plans are for Todd’s father’s day. They don’t know what to get for him because no matter what they get, he complains. They ask him what he wants to do, and he says he doesn’t want any gifts or kids around and just wants to spend the day with Julie. “Just leave me alone,” he says. “It’s one day.” The kids are going to have to come up with something, and Savannah says she’s got it under control. After everyone else leaves the kitchen, Todd says “This is what I wanted.”

Julie and Todd talk about the difficulties in Kyle’s life that have been the result of his drug problems. Because he’s not currently communicating with the family, Chloe has been with them.

On father’s day, everyone except Kyle piles into the van to go to a secret activity Savannah and Chase have planned for Todd. Granny critiques Chase as he drives, saying just because the speed limit sign says 70 that doesn’t mean he can go 70, and that he needs to keep six car lengths between himself and the car in front of him.

They arrive at an amusement park called Funopolis. Todd immediately hates this idea, saying he’s starting to think he should have just stayed in bed today. “So this father’s day is really about what you want to do?” he asks the kids. Chase and Savannah say it’s just better when everyone does what the group wants as a whole, and this is just majority rule. Todd notes that no one remembered or thought about his back problems when choosing the activity.

After being sour for a little while, Todd decides to join in the fun and sprays everyone with water.

The family goes to the arcade, where Todd shows his competitive tendencies with the kids and taunting them. “I wanted to win the game. Happy freakin’ father’s day to me!” he says.

When they get home, the kids make him dinner and prepare cards and poems for him. Savannah and Grayson write the front cover of their handmade card on the wrong side.

Todd reflects on the porch about how sad it is that Kyle hasn’t reached out to him this father’s day. Granny comforts him by telling him Kyle will find his way back eventually. “My mother is one of the most phenomenal, decent, gentle women that this world has ever seen,” Todd says.

Todd enjoys the dinner and thanks the kids for setting up the day, saying it was one of the most memorable days ever. Chase congratulates himself on pulling the day off, and Savannah says “That was a funny joke. Let’s not tell it again.”

Later that night, the kids present Todd with his gift, a framed photo from their photoshoot. “It truly was the highlight of my day,” he says.

Julie and Todd are getting ready to move in anticipation of Chase and Savannah leaving the house. (Their new home is 12,000 sq./ft compared to their previous home, which was 30,000 sq./ft.) Julie says she wants them to get moved in and settled before Savannah’s Miss High School America Pageant. Todd asks if this will be her last pageant. Julie says that Savannah says so but she doesn’t actually know.

Julie says she isn’t excited to move because she already knows Todd is going to be controlling everyone.

Danita, Savannah’s pageant coach, comes over to meet up with her. Todd has had a rocky relationship with her and says he’s leaving it to Julie and Savannah. Danita makes Savannah sign a ridiculous contract saying she will have no social life for the next two weeks and will eat, sleap and breathe the pageant. Julie says she can’t take Danita seriously because pageants are Danita’s life and for her, pageants are just a step in her life.

As soon as Savannah begins to try gowns on, Todd starts criticizing them for being to revealing. He tells Danita that she’s got Savannah looking like she’s about to work a corner. Savannah says she’s 17 and should be able to have her own opinions.

Julie pulls out a swear jar for the duration of the move and immediately starts collecting money for it.

Todd has taken control of the mission to find Savannah a gown, vowing to find one that’s appropriate. “She’s channeling her inner hooch,” he says as she tries on a red gown. Savannah says that between Danita picking out dresses she doesn’t like and her father trying to make her look like “a 16-year-old nun,” her dress buying day has been ruined and she’d rather just go home.

Todd has written up lists of tasks for everyone in the household to complete for the move. Julie demands he put $5 in the swear jar for putting ‘take care of your kitchen’ on her list.

Savannah meets up with her pageant coach alone to practice. Danita helps her work on her walk, criticizing her for walking ‘like a lazy river on a hot summer day.’ “My dad can be harsh and criticize me at times, but Danita’s taking it to a whole nother level,” she says. Danita ends up quitting, feeling that Savannah isn’t taking this seriously, and Savannah says she wished she hadn’t signed that contract. If her parents find out Danita quit, they’ll be furious.

Savannah asks Todd what he’s done for his part during this move, which remains a mystery. Everyone works together to get everything on the moving van, with Savannah taking selfies intermittently and Grayson taking breaks sprawled out on the floor. Julie and Todd reflect on the many memories formed in the house, but say they were emotionally ready to leave.

Savannah tells Todd Danita quit, so Todd decides he is her new pageant coach. He says that by the time he’s finished. Danita will look like a walk in the park. He criticizes her walking, but Savannah says she may as well have no coach at all because he doesn’t know anything about pageants, whining “I want Danita back.” “Goal accomplished,” says Todd. “She walked right into my little plan.”

Savannah meets up with Danita, apologizing and begging for her back. She admits that without Danita, she doesn’t even know what to do. Danita then gives her a speech about how the world is not going to be kind to her so she needs to be prepared. Savannah finds this an interesting way to give a pep talk.

They fly to Miami for the pageant. The training with Danita paid off, as Savannah places in the top 15. Savannah reveals to Todd that she still wants to do pageants, and that there’s another one in January. Todd, who thought he’d never have to deal with Danita or pageants again, sighs audibly.