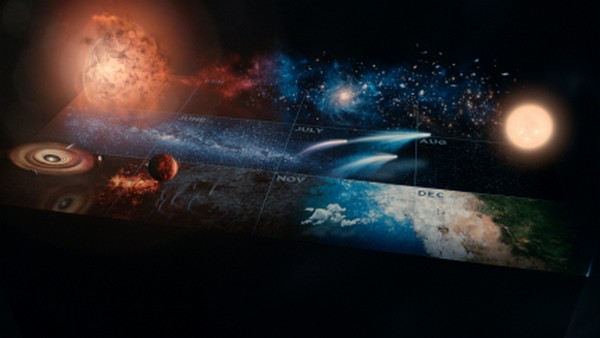 Tonight on NBC Carl Sagan’s stunning and iconic exploration of the universe as revealed by science, COSMOS: A SPACETIME ODYSSEY returns to NBC with a new episode called, “A Sky Full of Ghosts.”  On it a journey back to 1809 features astronomer William Herschel’s observations on the effects of light on time and gravity. Also: Tyson travels to the event horizon of a black hole.

If you have not seen the show A Spacetime Odyssey sets off on a new voyage for the stars. Sagan’s original creative collaborators writer/executive producer Ann Druyan and astronomer Steven Soter – have teamed with Seth MacFarlane (FAMILY GUY, AMERICAN DAD) to conceive a 13-part series that will serve as a successor to the Emmy Award- and Peabody Award-winning original series.

Hosted by renowned astrophysicist and author Neil deGrasse Tyson (“Death By Black Hole,” “Space Chronicles: Facing the Ultimate Frontier”), the series will explore how we discovered the laws of nature and found our coordinates in space and time. It will bring to life never-before-told stories of the heroic quest for knowledge and transport viewers to new worlds and across the universe for a vision of the cosmos on the grandest scale.

Tonight is going to be another interesting episode ofCosmos for sure and you’re not going to want to miss a minute. Tune in at 9 Pm EST on NBC and we’ll be recapping it live right here for you but in the meantime, hit up the comments and let us know your thoughts on the show so far.

RECAP:  Neil comes out explains about a man named Hershel he was a man who was asked by his son about ghosts, he didn’t believe in human ghosts; he told his son that the stars themselves are ghosts, that every star is a sun. The light from the star travels fast, but not infinitely fast because it takes time to travel it could even take aeons for their light to reach Earth. That sometimes their dead before them even reached the light, making them ghosts. William Hershel was the first man to understand that a telescope is a time machine, in one second light travels in 300,000km every time you look at the moon you looking a second into the past. It cuts to saying that the sun is only an illusion, that we only see a mirage of the sun over the horizon. The sun is eight light minutes away, the sun doesn’t rise at all either; the Earth turns and the sun follows. Neil explains that We’re moving at the speed of a jet plane turning, the horizon is also another illusion. Neptune is four light hours away, making it four hours into the past. Galileo took his first look through a telescope and tried to measure the speed of light, but he didn’t have the technology to do so; when we look at the crab nebula form Earth we’re look far into the past in life; it’s a collapsed star the size of a city spinning. The Crab Nebula is about 60 hundred nebulas from Earth and some people believe that’s the age of the universe, but how can we see past the Crab Nebula; we can’t because it would take too long for light to travel. The center of our own galaxy is over 30 thousand light years from Earth, Neil continues to explain the oldest light is the pale ghost in the light; the oldest galaxies we’ve ever seen is 14.4 billion starlight. It comes from the first generation of stars, during it there was no sun, Earth or Milky Way. If you try to look further into the universe it looks like the end of space, but it’s in fact the beginning of time.

Earth pulls on us; gravity is a continuing struggle with us. It shows a young girl trying to crawl out of a gravitational web; we are always struggling to move with a gravitational pull. January 1st is the beginning of time, the fog outside is a dust caused by the Big Bang. Nobody knows about what happened after the Big Bang, though there have been many ideas of what happened. We’re at the center of the Earth, everyone has to feel special no matter what galaxy you live in you find yourself at the center of the cosmic horizon, though that’s only an illusion. A few hundred millions of years after the Big Bang created new sources of light for the galaxy; the first generation of stars died and then made it possible for the formation of planets and life. Matter and energy were formed in the Big Bang, along with space and time. Isaac Newton made a law to describe the laws of gravity, Hershel Williams found out there was more to gravity. It shows a cartoon of Hershel telling his son John about a discovery that gravity keeps them on the Earth, his son asks how he knows this. Hershel asks him if he can find the constellation of the lion, his son points it out, he asks for him to find the body of the lion and that star there is actually two stars. HE explains that many of the stars dance with invisible partners, gravity governors all the helms. James Clark Maxwell translated fields of electricity and magnetism into math, which made him find out the speed of light. Albert Einstein worked on his theory of gravity, while day dreaming in Italy he was given inspiration that aided him in his theory.

In the summer of 1895, Einstein’s family moved to Italy; this is where his day dreams would take place. One day he began to think about life and how fast it travels, there is no fixed place in the cosmos everything is in motion. Neil takes his bike to a picnic and shows the book that inspires Einstein when he was a young boy; the first page explains the speed of electricity through wires and light through space. This book made Einstein think about how fast you could travel at the speed of light; this was something that lingered on his mind; that so much was critically accepted by others that were wrong.  Einstein made the rules of relativity. Nature commands that thou shall not add my light to the speed of light. No matter how hard you try you will never reach that last decimal point, in the cosmos there’s always a speed limit. A crack of a whip is the it’s tip moving at the speed of light making the sound it makes, somewhat like a thunder clap. Einstein found is framework for the world based on the speed of light. Nothing can catch up with the speed of light; the laws of nature are unbreakable.  Einstein showed that funny things happen in the speed of light, traveling close to the speed of light is an elixir to life because it can make you out live other in your life.

William Hershel loved sharing the wonders of the universe with his son John, Hershel talks about a friend named Jon Mitchel the poor man died when John was a baby; he read that some stars were invisible and that we’d never see them. Mitchel called them dark stars; the kid thinks his father’s friend is mistaken because how does he know they exist? Hershel asks his son who made the foot prints in the sand, the kid doesn’t know; thus proving Mitchel’s theory of dark stars. Mitchel was described as a short little man with short complexion; he imagined a star so big and massive. Mitchel believed that we could find these dark stars because of the intense strength of its gravity. A dark star is known as a black hole today, Neil makes a pit stop to New York his home town. Gravity is something that never changes, what if we could one day alter gravity? If the Earth’s size and density was different then the gravity would be different. If gravity is altered people would be lost floating when lowered, but if you raise gravity it could end up crushing objects and people. Mitchel’s dark star, our black hole could be closer than we think.

Not every star can become a black hole; one in every thousand star can be big enough to become one. A black hole is dangerous, if you see one in person it’ll be the last thing you’ll ever see. When giant stars their nuclear fuel they end up collapsing and leaving their gravity behind, which makes the star shrivel into something small. Signis X1 is the first black hole recorded in human history; they found it using x rays. An Event Horizon is what are difference between us and the black hole that if you’d enter that you would go where no traveler has gone before. People have searched the hearts of several galaxies; there are black holes in all of them. The stars nearest to the center of our galaxy is a black hole, Earth is far enough away from that they have no need to fear of it.

If you could survive the trip into a black hole you could end up into a different time than we’re currently living in, the properties of space can be changed and deformed, meaning that also time can be. Einstein said that space and time are aspects of the same thing; black holes could be tunnels in the universe; that you could travel to the farthest reaches of space time or find yourself in a different universe. As far as we know when a giant star collapses to make a dark hole the strength of the gravity could cause another Big Bang.  For all we know if you want to see what it’s like to be in a black hole, just look around you. Hershel’s son ended up becoming a great scientist, and when his father died he wrote in Hershel’s epitaph that he “broke through the walls to heaven.” John Hershel was a founder of a new means of time travel, known as photography. It may not be possible to travel back in time, but maybe we’ll be able to bring the past to us. Hershel shows a past experience of himself, the day he met Carl Sagan. It reminds him of the stars above, shining their light even after they’re long gone.