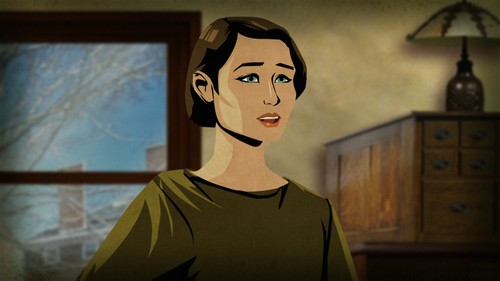 Tonight on FOX Carl Sagan’s stunning and iconic exploration of the universe as revealed by science, COSMOS: A SPACETIME ODYSSEY returns to FOX with a new episode called, “Sisters of the Sun” where Neil deGrasse Tyson talks about female astronomers and the lives and deaths of stars.

On last week’s episode we took a look at the work of geochemist Clair Patterson (1922-95), who calculated the age of the Earth—4.5 billion years—using a uranium-lead dating method, and also drew attention to the dangers of lead in the atmosphere and the food chain.  Did you watch last week’s episode?  We did and we have a ful and detailed recap, right here for you.

On tonight’s episode we will see a spotlight on the work of female astronomers, including Annie Jump Cannon (1863-1941), who cataloged stars by class, and Cecilia Payne (1900-79)(guest voice by Kirsten Dunst), who calculated the chemical compositions of stars. Also: an exploration of the lives and deaths of stars; and a visit to the planet of a star orbiting a globular cluster.

RECAP: A long time ago our relationship with the stars were more personal, we watched the stars as if our lives depended on it; in fact it did. Humans had one thing going for us and that was intelligence, night after night we watched the stars. Every human culture connected the dots with the stars, creating pictures. There was one group of stars pronounced as the Pleotese each of them are forty times brighter than our sun. For ages the Pleotese have been used for eye tests throughout the world, if you could see six of them then you were average, seven or more and you were a warrior. Long ago women snuck from their camp to dance freely under the stars, this leads into the story of how the Devil’s Tower was formed. The women who were dancing were attacked by bears, they got on a rock and pleaded for it to raise and save them; the rock raised becoming the Devil’s Tower and the women turned into stars. Orion was a man who became mad with desire, for seven years he chased a group of women relentlessly. The women prayed for Zeus to help them, Zeus felt sorry for them and turned them into the Pleatese. When Orion was killed by the scorpion he was turned into a star also, to continue his chase. It took three scientists to unlock the secrets of the stars.

In 1901 Harvard was a man’s world, a man named Howard changed that though. It shows an animation of Howard, Pickering were a group of women who devised us a way to calculate the size of the universe. Annie cataloged over a million stars during her time in the Pickering group. Henrietta was also an intelligent woman in the group. Annie sent out a Christmas card about what she was doing, she says that the star light hits a prism and it then shows a ray of colors; the spectrum of the star. It continues with the animation of Howard and the women working together. It took Annie decades to discover a ton of stars, she found out that each star had spectral lines and would be classed into different class and they would branch out into their own groups. In England in 1923 women were restricted from having a higher intelligence, a woman decided to go immigrate to America; her application to Harvard was already accepted. This was the dawn of astrophysics.

As the decades passed Annie and her team kept sifting the stars, into this community of woman came one more; Cecilia Payne arrived and was greeted by everyone. Annie and Cecilia became great friends, the most prominent feature from stars is calcium and iron one of the most abundant resources on Earth. Cecilia calculated what the spectrum should look like; the spectrum of any star shows you how hot it is. Annie’s scale was in fact a scale of how hot or cold a star is. When Russell felt sorry to Cecilia’s thesis because he thought it was fundamentally wrong, this broke Cecilia’s heart. She wondered to herself how she could be right if a distinguished scientist was wrong. She then added a bit into her thesis, Russell figured out she was right 4 years ago. In science the only thing that counts is evidence in the argument itself, she made us able to trace the story of life back to the very beginning.

There are many types of stars, some are bright and others are dim, others are young and others are old; some being born right now. Stars are born in litters; they could range from small or large enough to dwarf the sun. The stars below the Orion belt are small. Most of the stars in the Big Dipper are old and have already drifted apart from their birth cluster. The most familiar constellations are mixed with unrelated stars. Our own sun is middle-aged and a long way from when Earth was born. On a world with three suns, nights would be rare. It is the destiny of stars to collapse; thousands of stars are living in between two collapses. Gravity mixed stars contract unless intervened. As the sun consumes hydrogen its core shrinks, in about a billion years the sun will be ten percent brighter; it might not sound like much, but with that much heat it’ll have a big effect on Earth. Nothing lasts for ever, even the stars die. The sun will begin to bloat and become bigger; it will be able to swallow up Mars, Venus and even the Earth. Hopefully by then inhabitants of Earth at that time will find a way to live on other planets, so they aren’t swallowed up by the sun. The sun will collapse like a soufflé, shrinking down to the size of the Earth making it so dense it will stop any form of contraction.

When a star shrinks itself down to a degree where the nuclei could trigger a super nova explosion, what remains afterwards would be an atomic nucleus the size of a city; creating a pulse star; but for a star thirty times the size of the sun, there will be nothing to stop its collapse it’ll end up creating a super nova. Nothing can withstand the gravity from the super nova created from this star; it’ll force the boundary of space. The star will end up going inside of a black hole a place where light can’t escape. There’s a star in our galaxy can become a hyper nova, and it’ll be catastrophic. There are few places on Earth to get a good view at the stars; the Australian outback is a great spot. You can get a good view of the milky way from that point, we live in a spiral galaxy and when we look at we can see that the Milky Way’s bands of light. Most cultures connected the dots in the stars to create constellations; the aboriginal people of Australia saw darkness in the sky. A bird of some sort, there are so many ways to look at the night sky. Supernova blows up once a century. Now if our eyes were telescopes, then we could see the Milky Way in a better way. About seventy five hundred light years away, there’s a place of upheaval on an unbelievable scale.

We are shown the Ada Carina nebula a star making machine it takes a ray of light a long time to cross it. When a star dies it blows itself to smithereens here, its substance is then flown across the Cosmos; nothing is wasted. Though there’s a limit to how massive a star could be, in 1843 Ada Carina became the brightest star in the galaxy and ever since it’s been flipping out like crazy. At the center there is a crazy star, it’s a hundred times more massive than the sun; it’s pushing the limit of what star can be. It seems that it’s being tormented by an evil twin, another star within it. The star could end up blowing up, when it finally blows up it’ll be a cataclysm unlike anything we’ve seen before; a hyper nova. An explosion so powerful it’ll make a super nova look like a firecracker in comparison, anything near it will cause inhabitants of planets near it numbered. If Ada Carina blows up, Earth will be fine we are far away from it that it won’t affect us. Though its explosion will put on quite a show in the sky that we’ll be able to see. Out ancestors worshiped the sun, it makes good sense to revere the sun. The oxygen and the air, the carbon and our DNA were all made from stars years ago. We are star dust. Neil gets a bottle of wine from a woman, they both take a sip and then he says he can feel his brain take the chemical of wine and put into his brain and into the acoustics of his voice. He says that we’re lucky to have the vast form of clean energy.