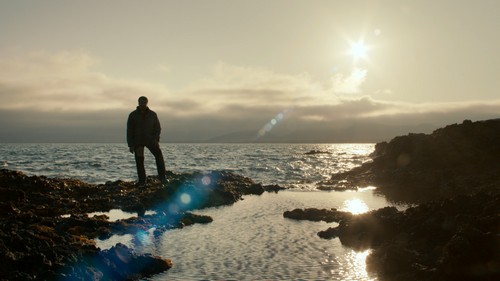 Tonight on FOX Carl Sagan’s stunning and iconic exploration of the universe as revealed by science, COSMOS: A SPACETIME ODYSSEY returns to FOX with a new episode called, “The Immortals.” Neil deGrasse Tyson talks about why civilizations perish and the possibility of beings that live forever are explored. Also: a look at what can be learned from science about the future.

On last week’s episode we traveled to 19th century England and met Michael Faraday, a child of poverty who grew up to invent the motor and the generator. His ideas about electricity and discovery of magnetic fields changed the world and paved the way for future scientists to make giant strides in the world of high technology and instantaneous communication.

On tonight’s episode The Ship of the Imagination travels across the cosmos to discover the possibility of beings that live forever and explain why other civilizations perish. Then, visit the Cosmic Calendar of the Future and contemplate what lies ahead with a hopeful vision.

RECAP: Our ancestors marked the passage of time by the moon and the stars, but it was the people that once lived here that started chopping up time into smaller amounts of time, into hours, minutes and seconds; this place is Iraq. It was here that we learned how to write, it gave us the power to reach across the millennium to speak to those in the future. Edwina signed her name to her work; she was the first person who we can say that we know who she was and what she did. Gilgamesh was the story of the first hero, before Luke Skywalker, Frodo and more. HE fought monsters and built a giant wall that no king could ever match, he was a hero who went through all kind of sufferings and traveled many distant lands searching for eternal life. HE encountered a man who told him about a flood, this man told him to build an arc to save on of each gender of animal. The earliest account of the survival of the flood was in Mesopotamia, we still read the epic of Gilgamesh; all heroes and superheroes follow the same path, they are immortal because they are stories. A message that every one of us scribes, the genetic code is written in an alphabet that consists of four letters, each word is three letters long; it’s written by nature and edited by evolution. Who knows how this happened, maybe it happened in the water; a carbon rich molecule made copies of itself and the competing molecules became more elaborate, which started evolution. Maybe life could have started in the searing heat of a volcano on the sea’s floor; Neil then tells us a story of a traveler from another world. A man was interrupted in the morning while farming; he found a meteorite that had a message written in it; many years passed before someone could read it. NASA landed on Mars later on in the 1900’s, a few years later when scientists decided to track the water in the meteorite; the kind that hit the Earth years ago could only come from one place and that was Mars.

Neil welcomes us to Mars, over a billion years ago a volcano erupted on Mars; hundreds and millions years later Mars had water, but an asteroid landed and ruined everything. Much of the debris was launched into space, and it found its way into Earth. Meteorites can hold microscopic cargo, the seed of life. Microbes spend a year and a half sitting on the international space station, some of them were alive and kicking when back brought to Earth. If life can endure the hardships of space, it could ride the planetarium travel system and land. Large asteroids were bombarding the Earth for several years, each collision would have sterilized the planet for thousands of years; we know that bacteria was evolving during this period, so how could life survive such a lethal amount of blows? Many boulders were launched into space carrying life within it. Noah’s ark means that life doesn’t need to start off again, it can pick off from where it left off. Venus was once like Earth at first; does Earth carry any proof of planets sharing rocks? We know that rocks can carry life from planet to planet, but can the same be done from star to star?

Neil picks up a dandelion, around thirty years ago the dandelion evolved throughout space and time; he blows on it sending seedlings around. These seedlings then go into the air and can travel dozens of kilometers; evolution has changed it into a flying machine. The seed is another arc ensuring the survival of its species; each seed carries a character and a story. IS it possible that life could survive the journey, from star to star? Space is so vast that it would take billions of years for a rock ejected from Earth to collide in to a star. There is a plausible scenario where life could live go from star to star, our sun takes two hundred and twenty five million years to complete an orbit. Galaxies are world making machines; our Milky Way creates tons of new stars and planets. Our sun is accompanied by a trillion distant comets. Some comets can be hurled out between the spaces in between the stars, while others will plunge towards into the sun. Some of them may collide with the planets, the high speed impact of the comet will launch boulders into space like rockets; many of those rocks will carry many microbes and can fall like meteors into other planets. IF the stowaway microbes come in contact with water, they could revive and reproduce. These new worlds touched by life will make their birth cloud and go their own separate ways. Imagine if this process repeated from world to world, each world bringing life to others. Life with a slow chain reaction throughout the galaxy. This could be how life came to Earth, we do not know for sure; are there other beings out there like us asking the same questions as us share the same fears and have the same heroes and adventures? Where are these people and how do we make their presence known?  How did we first announce our presence into the galaxy and that was at the end of the Second World War. American engineers bounced radio beams at the moon and heard echoes, this was the first interstellar message sent. Traveling at the speed of light, it takes one second for a radio wave to reach the moon; after a travel of 2.5 seconds it’ll then go around and reach our planet. The parts that miss the moon will bounce off and continue to travel. Our world is radiating stories, our ancestors etched the story of Gilgamesh into clay tablets, we’ve put our stories into Television and Radio; we’ve been sending our stories for over 70 years to other planets. If this world has radio telescopes then they could know that we’re already here, but what if other worlds are doing the same? For all we know we could have missed an alien signal, we’ve only listened to a very small amount of stars throughout the galaxy. Radio and Television broadcasting could only be a brief passing of our technological advancement. Civilizations slightly more advanced than ours could have already moved into a more advance way to communicate with others. There’s another more troubling possibility, civilizations only live for so long; what is the life expectancy of a civilization?

By the first time Edwina got the credit for writing the first thing, the world was already several years old; the civil war of Mesopotamia ended up setting them back, causing decline. 3,000 years later, the climate would change erupt for Central America, the Mayan civilization died out? Today we have a single global civilization, how long will it live? A super nova could end Earth with its cosmic radiation, stars won’t be going super nova anytime soon though. Every million years or so a super volcano erupts on Earth it happened 74,000 years ago. The eruption loaded the upper environment sulfur gasses blocking out the sun for several years, this so called volcanic winter resembled a nuclear winter without the radiation. The global human population must have rebounded when this volcano erupted; Neil hopes that in the future we could find a way to know when a super volcano would erupt and how to stop it. We can advance throughout the years to stop a danger that could end the Earth, but what happens when the Earth ends unexpectedly?

It began with Columbus; they brought diseases to the Native Americans which affected a ton of the Indians in Central and North America. What about civilizations that self-destruct? Our economic system was formed when all of our natural resources seemed infinite. Every company is profit driven and have one similar goal. The prevailing economic systems have no built in mechanisms to protect themselves a hundred or thousand years from now. We are ahead of the people of Mesopotamia; we understand what we’re doing to our Earth in which they didn’t. Our civilization though is in denial, being able to adapt our behaviour to challenges is something that’s great about us. If our intelligence is the most recognizable trait of humans, then why don’t we use it to help ourselves? We should use our intelligence to aid ourselves, to sharpen it and make it the tool of our survival; if we do this we could solve any problem we’ll be encountering in the next thousand years. Converge; giant elliptical galaxies may be the oldest that can be found. A red dwarf star is by far the most plentiful star in the cosmos, they will continue to provide light and warmth for trillion of years; what would people do if they had an eternity to live, would they discover many new things. What is our own future, what would the cosmic calendar for the next fourteen billion years look like?

Science makes it possible for us to foretell certain astronomical events such as the death of the sun, it will one day exhaust its oxygen becoming a red giant; if we apply our intelligence our descendants will depart from Earth. The next golden stage of achievement starts here, people will stop dying from poverty and the polar ice caps were restored as they were; by the time we are ready to settle to other planets we will have changed. Necessity will change us, we are an adaptable species; it will not be we who will begin interstellar travel, but species like us who are more advanced. What will we accomplish in another generation and another; how long will our nomadic species venture several years into the future?