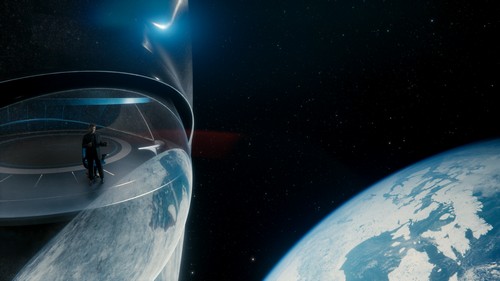 Tonight on FOX Carl Sagan’s stunning and iconic exploration of the universe as revealed by science, COSMOS: A SPACETIME ODYSSEY returns to FOX with a new episode called, “The World Set Free.” A look at Venus and what may have happened to it as a result of the greenhouse effect. Also: an examination of climate change on Earth and what it means for the future.

On last week’s episode the Ship of the Imagination traveled across the cosmos to discover the possibility of beings that lived forever and explained why other civilizations perish. Then, visited the Cosmic Calendar of the Future and contemplated what lies ahead with a hopeful vision.  Did you watch last week’s episode?  If you missed it we have a full and detailed recap, right here for you.

On tonight’s episode the Ship of the Imagination travels to our near neighbor Venus, where we begin our journey to discover the long history of global warming and the greenhouse effect. Later, explore the detrimental effects of climate change and trace the magnitude of our impact on the Earth’s atmosphere. However, with knowledge, technology and science within our grasp; imagine a hopeful future where we dedicate our efforts to taking care of our home, Planet Earth.

RECAP: Once there was a world not so very different from our own, there were occasionally catastrophes; for the first billions of years there was none. We then see what Venus looked like before everything went horrible wrong, from blue waters of beauty to a planet starting to be destroyed. The planet Venus which once may have seemed like Heaven turned into a kind of hell, when things started to unravel there was no way back. We then see what Venus looks like today. Venus’s oceans are long gone, the surface is hotter than a broiling oven; it turns out that the reason it’s so hot is because the small rays of sun light have a hard time leaving the planet. The Soviet Union landed a robot on Venus, they were able to take pictures of Venus due to keeping the robot cool; it only lasted about two hours and the robot finally over heated. Most of the carbon on Earth has been stored for eons. A creature a thousand times smaller than a pin head are shown, volcanos provide carbon dioxide into the air. Later the restless Earth pushed up the sea floor and carved the massive cliffs Neil is standing in front of. With no CO2 at all the Earth would be frozen, though if we had too much Earth would get uncomfortably hot; not like Venus though. Venus had no way of capturing CO2, which lead to its demise. The Earth in stunning contrast is alive, it breaths, but very slowly a single breath takes a whole year. When spring comes to the north the plants inhale carbon dioxide making them turn green. Plants drop their leaves in fall exhaling the carbon dioxide; the southern hemisphere does the same but at different times. The Earth has been breathing like this for years; we had no idea until a man named Charles found out about it.

The Earth keeps a detailed diary in the snow, the ice layers have ancient air trapped inside of them. The 20th century was the beginning of the carbon dioxide increase in our oxygen; CO2 is building up in the atmosphere warming up the planet. Neil shows us the Earth in the Infrared; we see its own body heat. The incoming light from the sun hits the surface; the Earth absorbs the heat making the infrared light. With no CO2 on our planet, Earth would be a big snowball. A small greenhouse effect is a good thing, though a big one won’t have a good outcome. It seems that the volcanoes could be at fault to this greenhouse effect, about 500 million tons of volcanic CO2 is put out every year; but it’s nowhere near the amount that we produce due to using oil and other fossil fuels. It’s clear that the increase in CO2 isn’t from the volcanos, we’re the ones at fault; how much is 30 billion tons of CO2 a year? That’s how much CO2 we’re putting onto our planet every year. Too bad CO2 is an invisible gas, if we could see it what would happen? Maybe we would overcome the denial and see how we’re ruining our Earth. NASA has made a map that indicates the heat of the planet throughout time, Neil shows us the map and we can see the heat building as years go by. We are brought back in time to explore a genius on the planet that tried to fix this problem.

Once there was a world that wasn’t too hot or cold, it was just right. Then there came time where the life it sustained began to see that our planet was change, it’s not like we didn’t see it coming. As far back as 1896, Savante a Swedish scientist new that with more CO2 the ice in the Arctic would melt; the Guy Calendar was the one who proved that it was happening. In 1960 Carl Sagan had the first calculation of the runaway greenhouse event in Venus, he warned about the people increasing the greenhouse’s effect by releasing far too much CO2. Since Carl spoke those words, we’ve burdened the world with tons of carbon dioxide; if we don’t change the way our planet is headed, what’s going to happen for our kid’s future? We inherited a bountiful world, but now our carelessness and greed put everything at risk. Neil wonders if scientist is good at knowing what’s going to happen in the future, why they can’t figure out the weather accurately. It’s because weather is a crazy thing that is dynamic, it will always change and no one will ever be a hundred percent correct with guessing the weather. It’s almost impossible to predict the weather, we can’t observe climate directly; we can only see the weather. Weather is hard to predict, but climate is predictable. The strongest force changing our climate is the burning of fossil fuels, the vast increase of CO2. So we’re losing the summer sea ice in a place where no one goes, who cares right? Well you will be caring, ice reflects incoming sun back to the surface; water absorbs the sunlight which melts the ice. This is a positive feedback loop. Neil is in Alaska on the edge of the Arctic Ocean.

The perma-frost that is now thawing is producing CO2 also, this is going to be doubling the CO2 rate in the world; the air, the water and the land are all getting warmer. This may not be our fault, it could just be nature; could it be the sun? No the sun is not responsible, the energy output from the sun hasn’t changed for years. It’s now clear that we are changing the climate, the sun isn’t the problem; but it is the solution. We’ve known this for a long time, much longer than we think 1878 in Paris the head of the Statue of Liberty had just been completed. Thousands of exhibitors of people’s inventions were being demonstrated, a French math teacher is who everyone wants to see, and he showed people the solar panel concentrator. He took the gold medal at the science fair at that time, but no one took interest in his solar energy and he ended up having his research stopped.

Egypt in 1913, there was a man named Shuman who never did much schooling; though he was a brilliant man. He became rich enough to pursue what he loved the most, solar energy. He wanted to use solar power to make Egypt green; he made solar energy even cheaper than coal. The British and German offered generous amount to fund his solar energy, Shuman was dreaming even bigger though. Turns out that oil was abundant and far cheaper than coal, it took a hundred man a week to ship a bunch of coal, though only one person could do the same with oil; it was easier. There’s another source of clean energy in the world, the wind alone is similar to solar energy. Wind farms take up very little land, they are placed where winds are the strongest; if we had enough of them we would have enough energy to run our civilization. More solar energy falls onto our Earth in one hour more than the amount of energy we have around the world. It’s not too late, is our future worth fighting for? Every one of us comes from a long line of survivors, our ancestors thoughts of long term living is how we are alive today. The most mythic human accomplishments came out from our darkest hour.

Once there was a world that had tons of nuclear weapons, both countries were at a race to past the other in progression. When Neil was three years old the largest man made explosive was blown up by the Soviet Union. The nuclear rivalry between the United States and the Soviet Union had another by product, having someone on the moon first. President Kennedy’s speech about sending a man to the moon is well known, though there was no scientific reasoning to going to the moon. We discovered a new world when we landed on the moon; we discovered what our world looked like. A project that was conceived due to a dangerous competition brought us the discovery of our planet. Ten thousand years ago our people took advantage of the gentler climates, this brought us agriculture. We stand on the shoulders of those who worked hard to change the world as we know it, now it’s our turn to do the same. The runaway greenhouse effect on Venus was unstoppable, there are no scientific obstacles to protect our world; it all depends on what we truly value. If we are able to summon the will to act, then we could save the world.