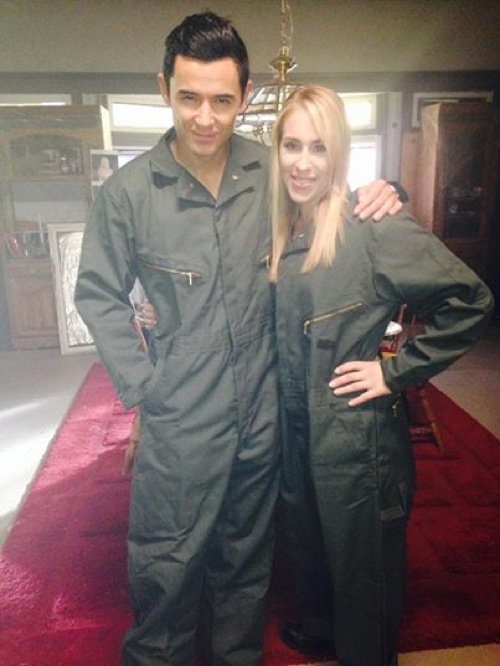 Tonight on VH1 Couples Therapy continues with an all new Wednesday October 22, season 5 episode 7 called, “Reflections of the Past.” On tonight’s episode the couples reveal traumas from their childhoods.

On the last episode Evel revealed he had health issues, and the cast responded in a surprising way. Meanwhile, Treach and Cicely continued to fume at one another, and Nikki continued to reel over Juan Pablo’s actions. Did you watch the last episode? If you missed it we have a full and detailed recap right here for you.

On tonight’s episode the couples reveal traumas from their childhoods; Dr. Jenn plans an aggression-releasing activity.

Tonight’s episode is going to be another drama packed one, which you won’t want to miss. So be sure to tune in for our live coverage of VH1′s Couple’s Therapy Season 5 Episode 7 at 9PM EST! While you wait for our recap, hit the comments and let us know how excited you are about this new season.

The couples meet up with Dr. Jenn to talk about their deeply rooted issues from their childhoods and how those affect their adult relationships.

Juan Pablo talks about how his best friend dated his first ex-girlfriend and how that situation made him loyal.

Treach talks about how not having his father around has affected him. His father never saw him despite living right around the corner. One Christmas, he got his father a tie to find out that he had moved without telling him. Drug dealers then took him under their wing and became his family.

Jenna’s mother was a showgirl, and her father was a cop. Everything was perfect until her mother got malignant melanoma and eventually died. Her father didn’t let her go to her mother’s funeral or visit her grave, which she can’t locate to this day.

Her father was emotionally abusive and issued strange punishments. She then talks about how she was assaulted and raped by eight boys. Walking back home, she decided to tell her father she had gotten in a fight. She then isolated herself from the world and didn’t speak for months. She describes her life as “a series of awful things,” saying she keeps waiting for the light, but it never comes.

Nikki talks about how she was popular, a great student, good at everything and had a good home life. She was also able to throw fits to get what she wants, something she has carried on to her adult life, particularly in her relationship with Juan Pablo, who refuses to say he loves her.

Jenna is very shaken by the group session, just one of a few recent times she has had to reflect on her painful past. She and John talk about how it really has affected their relationship. John says he would never lay a hand on her because he doesn’t have that capability. He hadn’t known the extent of Jenna’s past traumatic experiences.

At dinner, they talk about the session and Nikki starts talking about things that have happened to her, such as being lost in a Walmart and getting kicked off a varsity team, which they asked her to rejoin and she refused.

This offends Jenna. “How can you listen to each one of these stories and feel sorry for yourself cause you’re so ‘good at everything’?” she says.

Later that night, Dr. Jenn takes the group to a spooky old house for an exercise that will help them let go of some of the pain from their pasts.

Dr. Jenn talks about how until they heal, they have a house of horrors of their own. The exercise will have each of them finding something that reminds them of past trauma so they can destroy it.

“My heart is like beating so fast right now,” Jenna says. “There’s a whole room of everything that triggers me from my childhood.”

Jenna smashes mirrors and a table covered with plates and cups while yelling out the things she needed from her dad that he didn’t give her. She talks about how John offers her safety that her family didn’t.

Jenna says the fact that her grief upsets John makes her feel that she’s not alone anymore and her heart is beating for the first time ever.

Juan Pablo lets out his anger at his ex-best friend and ex-girlfriend, talking about how they both made him feel betrayed, making it hard for him to trust anyone or say “I love you.” Nikki says she just learned that Juan Pablo is scared too and just wants to trust her.

“Just realizing that Juan Pablo is just as scared as I am, I never ever would have thought that,” she says.  “It feels like a new start because we understand eachother better,” Juan Pablo says.

Treach talks about how his father left him, a little kid, to raise himself. He finally gets the chance to let out the pent up anger at his father. Afterward, Cicely hugs him. He tells her he needs her to be there for her, and she says she will. Treach says having Cicely embrace him makes him feel like somebody’s in his corner. “When we leave this house, we gotta leave our past here,” Cicely says.

Cicely reads aloud a magazine article talking about the issues between Nikki’s friend and Juan Pablo.

“I don’t blame him for not saying ‘I love you,’” Cicely says of Nikki. “It’s hard for me to like you!” Nikki defends her friend, saying that’s how she felt. Cicely says if someone talked trash about Treach, she wouldn’t be her friend anymore.

Nikki storms off when Juan Pablo makes a joke about her friendship with her friend. “Nikki, you kind of met your man on a dating show,” Cicely says. “You were the winner. Leave the contestants behind.” “I really like Juan Pablo, I really like Nikki,” Dick says. “Together, I don’t know.”

Juan Pablo goes into the bedroom to console Nikki.  “That’s my friend,” Nikki says. “Why are you letting them call her a liar[?]”

Jenna overhears this from her room and comes closer to eavesdrop. She hears Nikki criticizing Cicely from giving her opinion, saying it’s rude and she has no room to speak because she wasn’t there. She says Juan Pablo could see how uncomfortable she was and did nothing to help. Juan Pablo says she was simply giving her opinion on the situation.

“I hear Nikki say, ‘Cicely was totally disrespectful,’” Jenna says, asking how Nikki can be “so smart and manipulative, and yet so dumb.” She comes outside to stir the pot and reveal what she heard. She tells Cicely that Nikki is calling her extremely disrespectful, which pisses Cicely off.

Meanwhile, Nikki is still going on to Juan Pablo about how she felt disrespected and that he didn’t stand up for her.