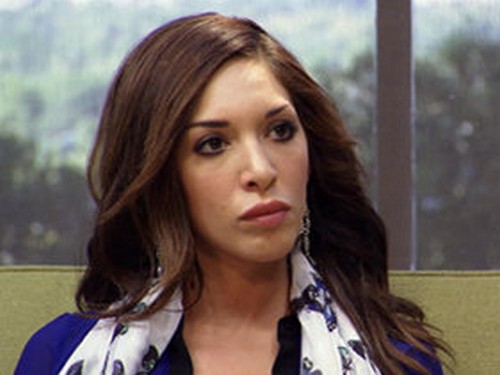 Tonight on VH1 is the 4th season premiere of COUPLES THERAPY called, “Player For Life.” On tonight’s show The couples’ sex lives are addressed in group therapy. Also: Sada’s upbringing comes into play; and Ghost reveals news to Kelsey.  Did you watch last week’s premiere episode?  We did and we recapped it, right here.

On last week’s show a Jon and Liz’s first group session, Jon admitted that during a break in his relationship with Liz, he slept with other women, which now made Liz not trust Jon. Sada questioned whether Farrah’s sex tape was amateur or professional and this isolated Farrah more from the group. In an emotional therapy session with Dr. Jenn, Farrah admitted that a big reason she acts the way she did is because of her parents, and that made it hard for her to connect with people. It is Sada’s birthday, and the group celebrated with a big party, but Whitney got upset with Sada because she caught her flirting with Ghost, and the two end the night in a screaming match. Liz discovered Jon in a compromising position, and Liz’s reaction made Jon realize that Liz is more like his ex-wife than he thought.

On tonight’s show in group therapy, the couples discuss their sex lives, and how issues in the bedroom can be telling about their emotional relationships as well. This particular subject was hard to talk about for Jon, who was caught by Liz when he was trying to masturbate. It was also a difficult subject for Sada and Whitney to talk about, because Whitney feels too much like Sada’s mother, which sets Sada off. After fighting over their relationship, and if it is even going to work out, Dr. Jenn brings Sada and Whitney in for an insightful therapy session. Dr. Jenn discovers Sada was raised in a household with a lot of turmoil, which she clearly brings into her relationship with Whitney. In a therapy session, Ghost tells Kelsey that he has another woman on the side that he cares for, and wants to bring her into therapy for a session with Kelsey. This infuriates Kelsey, who is confused and torn, and the two continue to fight, but Kelsey is the one to get the last laugh.

Tonight’s episode is going to be another drama packed one, which you won’t want to miss. So be sure to tune in for our live coverage of VH1′s Couple’s Therapy Season 4 episode 5 at 9PM EST! While you wait for our recap, hit the comments and let us know how excited you are about the new season of Couples Therapy tonight.

Tonight’s episode of couples’ therapy, Dr. Jenn Berman warns everyone that her patients are at the halfway point of their therapy. And while some have made progress, others have taken two steps back. She’s opening up her first session this week with Jon and Liz. She feels like they can make a good Segway for the rest of the group.

Dr. Jenn asked Jon how that made him feel and he said ashamed. When she mocked him it reminded Jon of his 10 year marriage to Kate. It’s like he’s had enough of that kind of behavior. Jenn told Liz that name-calling is one of the worse things to do in a relationship. It can slowly beat a person down.

Most of Farrah’s insecurities stems from how her sexual history was aired. Besides her role as a teen mom, she had gotten caught by her dad when she was 15. Very soon afterwards her whole family knew about exploring sex and that shamed her.

Kelsey probably the best to understand Farrah’s situation. She had gotten to the point where she put sex on the back burner as well. Her celibacy lasted quite a while up until she met Ghostface. He was the first person she slept with after her break. Kelsey had told him that but he didn’t understand the significance. Jenn tries to explain that Kelsey couldn’t come out and say what it mean because it would have driven him away.

Ghostface swears he would have understood but when Jenn break it down for him then the answer is no. He would have ran if Kelsey had told him she was giving a big part of herself and expecting monogamy in return. Which only serves to make Kelsey angry. Since coming to the show all she has been feeling is let down so she made a snide remark. Her boyfriend does get defensive but he told Jenn he was going to give her that point seeing as he’s tried of fighting.

Sada doesn’t feel wanted in her relationship. She feels like Whitney doesn’t desire her enough and when she says that she does then Sada doesn’t believe her girlfriend is being authentic. After a while Sada simply shut down. Both her and Whitney realized that Whitney takes control of sex and Sada has everything else. But that makes Sada feel like she’s always asking.

Jenn had made a mistake by calling that relationship a mother/daughter relationship. That was what made Sada shut down. Being compared that way made her feel unsexy. And later on she doesn’t want to talk to her girlfriend about it. She stopped communication and Whitney got tired of being stonewalled. She took a walk.

Ghostface went to Dr. Jenn for a one on one. He opened up about his other relationship. Apparently he has a lot of feelings for the both of them and thinks the best way to go forward is to introduce the women to each other. Jenn thinks that will break Kelsey. She hears him talking about closure but she points out that he’s disregarding Kelsey’s feelings.

Ghostface said he wanted closure although he hasn’t told the other girl he’s in couple’s therapy. Jenn has to be the one to tell him again that he’s hurting someone.

Whitney ended up talking out her frustrations with Sada to Jon. They had a quick chat and shared a small laugh over Jon’s situation. Whitney did realize that maybe she should have hugged Sada. Sada is very needy and she needs constant affection. Even when she got her hug, she wasn’t satisfied. She felt that it wasn’t enough.

Jenn is worried about Sada and Whitney. She thinks they’re too tumultuous. They’re the longest surviving couple there and their married. Jenn brings them in for a session. She told them they were fighting a lot and she wanted to get to the root of it. Sada explains that she grew up being short tempered. She inherited from her father and looking back she did see how that affected her parents’ marriage but then suddenly Sada stops talking. Jenn want to push her and she can’t. Sada doesn’t believe she should open up on anyone else’s marriage even if she might have witnessed it become violent and/or abusive. Though it would have helped Jenn to figure out why there’s a power struggle in Whitney and Sada’s marriage.

Ghostface and Kelsey got called in by Jenn. Jenn wanted him to admit to his emotional attachment instead of a purely sexual one to another woman. She feels he needs to come clean with all of it to Kelsey. When he does tell Kelsey what he was planning; she was angry. Kelsey didn’t know his chick on the side has been there for years. She also doesn’t get why he wanted them to all sit down together. She knows he only wanted to do that for him and never though how she would feel. He tries to apologize but she’s not buying it. Her boyfriend thinks he may do what he likes ad she’ll still be there come tomorrow. It’s all a joke to him

Kelsey stormed out of the session thinking she doesn’t want to be here anymore. She went to their room. Ghost followed her and he told her she couldn’t be acting that way. He wasn’t the one that wanted to therapy. It was her idea. Kelsey was trying to tell him how upset she was to learn she had been sharing him and he said something stupid. He got defensive again and told her he was technically with the other woman first. Ghost told Kelsey that his other girl should be madder than her.

Kelsey leaves their room after that and he kept on coming. He found her by the pool and told her he loved her. As if she doesn’t know he’s playing her.