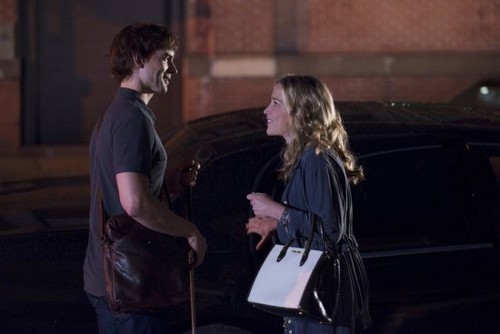 Covert Affairs continues tonight on the USA Network with an all new Thursday, November 6 season 5 episode 12 called, “Starlings of the Slipstream.” On tonight’s episode Annie searches for a rogue chemist in Germany after Auggie [Christopher Gorham] uncovers a startling link between the recent attacks on American soil. Elsewhere, Joan’s [Kari Matchett] time in the Balkans rouses suspicions after an unplanned polygraph.

On the last episode, McQuaid’s health hung in the balance; Annie sought information in Istanbul; Arthur took control. Did you watch the last episode? If you missed it we have a full and detailed recap, right here for you.

On tonight’s episode as per the USA Network’s synopsis, “Annie heads to Germany in search of a rogue chemist after Auggie uncovers a startling link between the recent attacks on American soil. Suspicious questions about Joan’s time in the Balkans rise to the surface during an unplanned polygraph.”

Tonight’s episode looks like it’s going to be great and you won’t want to miss it, so be sure to tune in for our live coverage of USA Network’s “Covert Affairs” at 10:00 PM EST! While you wait for our recap hit the comments and let us know how excited you are for the twelvth episode of season five of Covert Affairs tonight.

Annie was at home enjoying herself with the recently released McQuaid when she got a call that Auggie needed her. Apparently, Auggie got into a confrontation and it landed him in jail. So Annie had to go bail him out. Though she wonders why he didn’t reach out to her the second he could.

Annie had only found out about Auggie’s arrest after Eric had called her from the office. It seems Auggie didn’t even want to waste his one call on her and Annie demanded to know why. And so Auggie had to explain the painful truth to her – the two of them aren’t close anymore. Actually, they haven’t been close for a while now.

Hence, Annie isn’t the first person Auggie is going to turn to when he needs help. And he does need help. Auggie believes someone has been targeting his friends. According to his theory that’s still in progress, everyone that has come between Belenko and his plans has gone on to die under mysterious circumstances.

So if Annie really wants to help then one thing she can do is help Auggie take Belenko down! That is if she wants to be as good of a friend she claim. And so Annie agreed to help.

Auggie had put himself in danger when he let his intentions to investigate the recent attacks on American soil known to any and everyone. And, in spite of whatever might be said about Annie; she doesn’t typically abandon her friends when they need her. Disappoint them? Most definitely but she doesn’t leave them in the lurch. Plus Annie couldn’t let Auggie face Belenko’s men by himself.

Thankfully, McQuaid is even willing to assist. He lost a lot of contacts because of Catelyn but he’s managed to luckily retain a few that have come in handy. So Auggie and Annie did get their hands on a valuable name though Auggie would have preferred it if they hadn’t had to get it from McQuaid.

Meanwhile, back at CIA headquarters, Calder’s “obsession” with Stephanie appears to be getting dangerous. She had gotten him the information he needed and now he wants more. Calder wants to send her back in to spy for him and even Joan is wary about allowing that. They would be risking a civilian’s life if they kept pushing her to do their bidding.

But Calder doesn’t seem to care. He just wants to go back to being Stephanie’s handler and because Joan got tapped into submitting to yet another polygraph test – she’s no longer in the office to stop him from going through a potential dicey plan.

Calder did meet with Stephanie and he did get her to sign up so to speak. But while it made it all sound like an adventure – Stephanie never realized what the cost of serving her country might end up being.

As for Belenko, he’s been working on something. Probably another attack and as his plan was nearing completion – he sent someone to remove the agent he had hired for the project. Her name was Britta Caplan and she was recruited in the same fashion that got Catelyn to betray her own boss. I.e. Belenko turned on the charm.

In addition to Belenko making that poor woman believe he truly loved her, he gave her a wedding ring as well. It looks exactly like the one he gave Catelyn and Annie had to tell Britta that to get the other woman to trust her. And in case that was a clincher – Annie also told Britta about her tail.
Britta didn’t want to die so she gave Annie as much information as she could. But in the end, she died anyways and Annie was nearly taken prisoner.

Funnily enough, Annie was saved by the woman she was claiming to be Britta’s possible assassin. However the assassin confessed to being on the same side as Annie. It’s not just the Americans that have a grudge against Belenko – it seems he’s ticked off his own people as well. And now they want to stop him as much as the Americans.

Though there is one problem in this grand alliance. Someone has kidnapped Auggie and until Annie can trust these people claiming to be friends – they’re going to have to be treated as suspects!