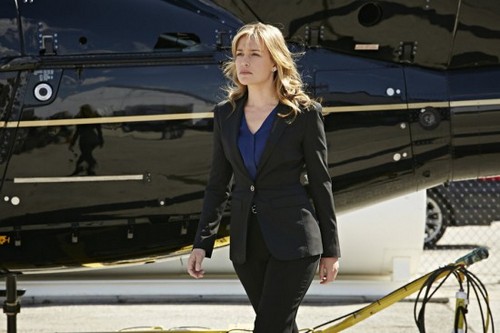 COVERT AFFAIRS continues tonight on the USA Network with its fifth season premiere episode called, “Shady Lane” On tonight’s episode Annie and Auggie consider their future; Calder and Joan learn who will be the new DCS.

On the last season finale of Covert Affairs, Calder wondered if Joan was the only person he could trust when he returned to the United States with good news. Elsewhere, Annie and Auggie continued their work to bring Henry to justice. Did you watch the last episode? If you missed it we have a full and detailed recap, right here for you.

On tonight’s episode the Season 5 opener finds Annie and Auggie thinking about the future just as a connection from the past resurfaces and leads Annie on a race against time to prevent a terrorist attack on U.S. soil. Elsewhere, tension mounts between Calder and Joan as they wait to see who will become the new boss; and Arthur thinks about a career in the private sector.

Tonight’s season 5 premiere looks like it’s going to be great and you won’t want to miss it, so be sure to tune in for our live coverage of USA Network’s “Covert Affairs” at 9:00 PM EST! While you wait for our recap hit the comments and let us know how excited you are for the season premiere of Covert Affairs tonight. In the meantime, enjoy a preview of tonight’s episode below.

In the fifth season premiere of Covert Affairs, Annie’s back after four months off the grid. Annie talks to Auggie about coming back to work and starting over without any emotional ties. Auggie welcomes her back.

The agency questions Annie about her whereabouts for the past few months. Auggie suspects that Annie is not being honest. Calder and Auggie ask Annie for more information. The agency finds that Annie’s “old friend” and terrorist Khalid Ansari is on American soil and Annie is called to be in Chicago.

The team finds Khalid holding a maid hostage. Annie asks Khalid why he’s in Chicago and he is surprised that she doesn’t know. As Khalid raises his gun, one of the agents shoots him. The investigation leads Annie to the home of Borz Altan. After meeting Borz, Annie follows him down the street. She suddenly loses her breath and is forced to fall behind. Panting profusely in an alleyway, Annie calls her doctor and talks about her episode.

With a suspicion that a big attack may be in store later that day, Annie’s mission leads her to a car in which she finds a dead body.

Annie catches up with Ryan McQuaid to talk about Borz Altan, Ryan’s former employee. During the conversation, Ryan is intrigued by Annie’s directness. He asks her out to dinner. Speaking of Ryan McQuaid, he also offers Arthur a position at his company. Arthur reluctantly accepts.

Meanwile, Joan returns from maternity leave to find that Calder is keeping her old job as DCS. Joan is upset that Calder took advantage of the situation but Calder denies that he had anything to do with it. Even with the tension between the two, they behave professionally as they work together.

Borz’s brother Mykola is implanted with a bomb that was unknown to the agents when they brought him into their headquarters. While Annie’s outside approaching Borz’s sister, the bomb goes off inside the facility, killing everyone in the building. Meanwhile outside, the Borz’s sister pulls a gun on Annie and Annie shoots her. The whereabouts of Borz Altan is still unknown.