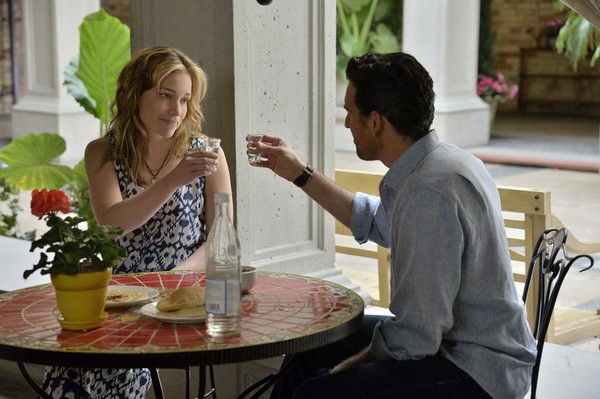 COVERT AFFAIRS continues tonight on the USA Network with another episode in its fifth season called, “Elevate Me Later.” On tonight’s episode a mission in Paris is complicated by Auggie’s emotional history, while Joan tries to play a matchmaker for Calder.

On the last episode Annie and McQuaid join forced to escape Venezuela; Joan and Arthur worked to extract the operatives. Calder’s clandestine affair took on a new dimension. Did you watch the last episode? If you missed it we have a full and detailed recap, right here for you.

On tonight’s episode a mission in Paris is complicated by Auggie’s emotional history, while Joan tries to play a matchmaker for Calder. Elsewhere, Arthur leaves for his first operation abroad for McQuaid Security.

Tonight’s episode looks like it’s going to be great and you won’t want to miss it, so be sure to tune in for our live coverage of USA Network’s “Covert Affairs” at 9:00 PM EST! While you wait for our recap hit the comments and let us know how excited you are for the third episode of season five of Covert Affairs tonight. In the meantime, enjoy a preview of tonight’s episode below.

Eric picked up something on the monitors and after he caught it – Auggie and Annie were instantly notified. There’s finally a lead on whoever funded the attack in Chicago.

The lead was desperately needed. Joan and Calder are getting racked over the coals for what happened in Chicago and so Calder’s late nights has the potential to sink them if this witchhunt goes on any longer. Hence Joan convinced (brow-beat) Calder into going on a date with her friend Laura. Laura is pretty high up in her field and having her on their side could do wonders. Particularly if anyone were to find out about the hooker.

Though why she feels the need to assist with anyone else’s love life (besides self-preservation of course) is a mystery. Joan and Arthur have been close yet that closeness still doesn’t leave her enough room to trust him on his overseas trips with Caitlyn. Arthur on the other hand swears nothing will happen. And he really shouldn’t have made promises he couldn’t keep.

His motorcade was attacked on the trip. He and Caitlyn barely made it out with their lives.

Back at the office, Auggie and Joan came to the conclusion that he was going to have to meet with a former asset. But Natasha wasn’t just anyone. She and Auggie formerly had a thing. And the last time he saw her, she told him that she loved him.

Now that ended up working against him because when he contacted her she got excited. Then she was disappointed when she realized he only needed a favor from her instead of wanting to spend time with her. So she was going to turn him down. She even did the whole walking away thing.

However he planted a bug on her so he was able to track her back to her hotel. Auggie used the spark that was still between them to his advantage. She was wrapped up in both him and afterglow (meaning she wasn’t of sound mind and body) when she agreed to make him the key he needed. But Natasha wasn’t foolish to waste any opportunity. In return for making the key she wanted the charges against her dropped and told Auggie he had to be completely honest with her.

Which he was …to a point seeing as he told her he cared for her and omitted the part about Hayley. Although some other things later changed between the happily reunited couple.

Auggie had heard back from Calder that they couldn’t erase Natasha’s record. Annie told him not to tell Natasha until after they got the key. She told him the mission was too big to risk over some hurt feelings and he made it seem like he agreed with her. Then the first thing he did upon seeing Natasha as to tell her the truth. Because he cared about her more than he cared about the mission.

While they were sleeping off their second go around and dreaming about new beginnings – the key, Natasha had already made beforehand, was stolen. She was furious when she realized what happened and wrongly blamed Auggie for it. She thought he slept with her as means of distraction while someone else broke in and the sad part is that he had no knowledge of what Annie was planning.

And it was Annie. She used the key to get the info they needed from some shoddy Russian, but in completing the mission – she risked her friendship with Auggie in the process. She was trying to explain to him that she had to put the mission first when he reminded about all the times they’ve been in reversed situations because when that happens Auggie has always put her above the mission. Yet when he needed her to she couldn’t do the same.

So, again without him knowing, she approached Natasha. This time not only was it to plead Auggie’s case but Natasha was also aware of it.

Annie managed to convince Natasha that Auggie didn’t know what she was going to do. And that allowed Natasha to go to him wanting a third chance so to speak on having a happy and normal life with Auggie. Though she still doesn’t know about Hayley and Auggie hasn’t said a word.

His happy ending can only last so long but while he’s currently in paradise – Annie is getting closer to whoever planned the Chicago bombing.