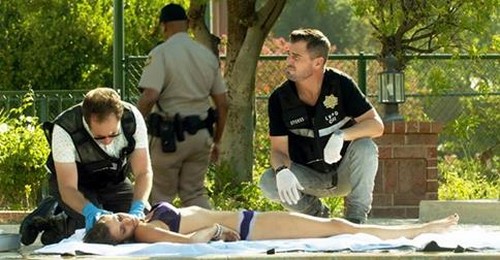 Tonight on CBS CSI: Crime Scene Investigation returns with an all new Sunday November 30, season 15 episode 8 called, “Rubbery Homicide” and we have your weekly recap, below for you. On tonight’s episode, the CSIs delve into the kinky world of “rubber dolls” when they investigate the murder of a man who was stabbed in an alley.

On the last episode, the CSI team investigated the death of Daycia Fox who was drinking, dancing and doing drugs at a club, like she didn’t have a care in the world. Unfortunately, things didn’t end well for Daycia. She wound up face-down in a swimming pool the next morning, in the backyard of a vacant house. Did you watch the last episode? If you missed it, we have a full and detailed recap right here for you.

On tonight’s episode as per the CBS synopsis, “the CSI team delves into the kinky world of “rubber dolls” when they investigate the murder of a man stabbed in an alley.”

On tonight’s episode of CSI, a man was killed while he was wearing a rubber doll suit. The suit Nelson Kern was wearing were created to give cross-dressers a full body experience. But the suit made collecting evidence tricky. The full-on body rubber essentially acted as gloves at a crime scene. Meaning the only DNA the team was able to collect all came from Nelson after someone had stripped him of his suit.  Any other hair and finger prints were a no go.

So the team needed some insight into men like Nelson. Hence they interviewed Belinda Goth. She’s the number one distributor of the doll suits and she’s also probably the only person that knows what many of these “dolls” look like without their getup.

Belinda pointed Russell and Greg to the dolls’ number one hotspot. And while the boys were on the scene, they just happened to catch a runner. “Violet” tried to flee the club when she saw cops were there. But she swears she only did that to keep her identity a secret.

Although she does admit to knowing their victim. Nelson went by the name Charlene. Charlene was a newcomer. She started showing up a couple of weeks ago and since then she’s become really popular. Kind of like a queen among them.

Taking her popularity into account, other dolls at the club said if someone attacked her then it couldn’t have been them. It was probably the same guy that’s been assaulting them when they’ve been caught leaving.

Yet Clay Miller, while a bigot, isn’t a killer. He likes to beat the dolls up but he’s never gone after them with a knife. Which was how their victim was taken down.

So the team had to take a second look at what they had and DNA was found. However it belonged to a dead woman. Nelson had on a dead woman’s earrings and that lead to the CSI team identifying his doll suit as recreation of a 80s pin-up girl.

The woman’s family wasn’t exactly pleased to hear their loved one’s image had been used to create a doll suit but they also swore hadn’t known about Nelson’s side project until the police came to them. Though something wasn’t adding up about the doll suit or the family

Nelson has a rival among the doll community. The other doll’s name was Lexi. And yet Lexi’s body suit was found in Nelson’s car.

These dolls don’t generally wear more than one suit. So only one of them must have belonged to Nelson and the other most likely belonged to someone else. Subsequently, Nelson had a history of stealing what doesn’t belong to him. Hence the Charlene suit was the evidence of his latest escapade.

The Charlene’s suit belonged to the real Charlene Brock’s widow. Her husband believed wearing a suit made in her image was the perfect tribute. And while that gives him cause – the widow would never kill anyone for honoring his wife. For that’s how he saw it. As an honor.

But the Brock family now all had motive. The son Jonah tried to oust his father as chairman of the family company. And the daughter seems to still have issues with her dead mother.

Jonah, as it turns out, had a sound alibi. He was videotaping himself having sex with a model. His sister on the other hand didn’t even need a push. Once Russell approached her, she started to crack all on her own. It seems she hated her mother and adored her father. So when she realized her dad was giving up quality time with her in order to dress up like his dead wife – she tried to kill him.

She thought Nelson was her dad when she attacked him and she didn’t realize her mistake until after the deed was already done. And the one regret she has is that she didn’t get the chance to kill her father when she had it.

And all of this happened because of a body suit!