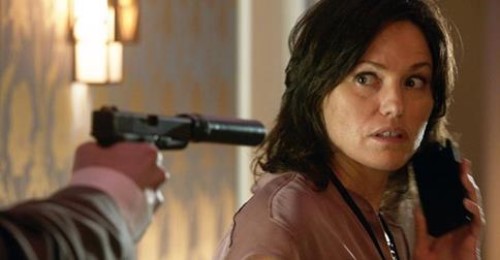 Tonight on CBS CSI: Crime Scene Investigation returns with an all new Sunday December 7, season 15 episode 9 called, “Let’s Make a Day” and we have your weekly recap, below for you. On tonight’s episode, the CSIs investigate a murder at the Clark County jail after an inmate stumbles upon a body while running away from officers.

On the last episode, the CSI team delved into the kinky world of “rubber dolls” when they investigated the murder of a man stabbed in an alley. Did you watch the last episode? If you missed it, we have a full and detailed recap right here for you.

On tonight’s episode as per the CBS synopsis, “The CSI team investigates a murder at Clark County jail after an inmate stumbles upon a body while running away from officers.”

During their routine vaccine shots, one inmate at Clark County Prison had a major freak out. It seems he was deathly afraid of needles. And to be fair he did try to warn the officers about it. But they wouldn’t listen so he began to attack everyone. Correction officers and fellow prisoners. Until eventually he escaped all those he had left behind at the scene of the crime and was making a run for it.

However Morrison didn’t get that far. He was still in prison after all and there was not a lot of places he could have chosen to hide. So he was found but oddly enough he wasn’t found alone. Morrison had come upon a dead body while he trying to escape the guards. And, surprisingly, Bruce Grady was the victim.

Bruce had a long rap sheet and was awaiting trial for yet another crime when someone chose to murder him. The word chose is used in this case because the murderer killed someone that was already sick to begin with. Apparently, Bruce was so sick, that’s the reason he was placed in a low maximum prison even though he’s been a career criminal all his life. So someone must have really have hated him!

Bruce received a letter not long before he was killed. The prison “kite” system told him to come to the laundry room for a meeting. And Bruce chose to attend. Although the detectives couldn’t understand why he would do that.

Prior to the kite letter asking for a meeting, Bruce had received another message and that time it had said “liars don’t last long in here”. The detectives hadn’t known what it meant at the time but later they found out something else about their victim. It seems he once acted as an informant for the DA’s office.

The DA was trying to take down a guy named Mayfield. Mayfield was a notorious gang leader and he’s arranged many deaths. Yet people were too afraid of him to come forwards. So the DA approached his cellmate and Bruce was willing to testify in exchange for a shorter sentence.

But then Mayfield’s case fell through. And Mayfield was allowed to return to the same prison that housed the man that had informed on him.

So, really, Mayfield was the perfect suspect though he swears he didn’t kill Bruce. According to him, he wanted Bruce to recant his story so he had no reason whatsoever to kill him. All he admits to was scaring the other man.

Mayfield said he shanked Bruce but not in the way that would have killed him. He knows this because Bruce wasn’t exactly his first. And though that story sounded farfetched – evidence does show that Bruce’s stab wound wasn’t his cause of death.

Bruce was strangled and upon closer inspection – Bruce had been informing on more than just Mayfield. A tiny recording device was later found on Bruce’s body and yet it hadn’t belonged to the DA. It was much too high tech for them.

Shockingly, though, the listening device had belonged to the feds. It seems the FBI was looking into a corrupt guard and they had enlisted Bruce seeing as he had done something like that before. But the feds refused to reveal who they were spying on. So the team had to play the guessing game.

They investigated a guard that allowed the prisoners free reign in the laundry room but evidence came to rule him out. So then they started to look at other officers. And what they found was another corrupted officer – this time a detective.

Detective Carl Brenner had an open prescription and the drugs he was getting was the same kind found in Bruce’s system. Though the drugs were poisoning Bruce and making him sick. Yet Brenner wasn’t the killer either.

Brenner hadn’t known about the federal investigation. He just knew Bruce had information on him so he was simply teaching the other man how to keep his mouth closed.

But the drugs Brenner had given Bruce is what he made so sick – he couldn’t fight his real killer. Bruce’s killer was a young man named Pete McCrone. Pete and Bruce know each other because Bruce had molested him when he was nine.

Bruce had gotten a plea deal and he only got three years for what he did to Pete. And then years later when Pete wounded up in jail after a petty misdemeanor – he saw Bruce again and he knew who he was. He was able to recognize the other man from his voice. After all these years, the voice is one thing Pete has never forgotten because Bruce had threatened Peter’s family with that distinctive voice of his.

And that situation (what Bruce did to him) pushed Pete into killing his attacker.

Yet the worst part about this case is that Pete wasn’t even supposed to be there. His public defender had dropped the ball on his case and if he hadn’t then Pete wouldn’t have spent a month in prison. Typically in a case like his, he would have been freed after a day.