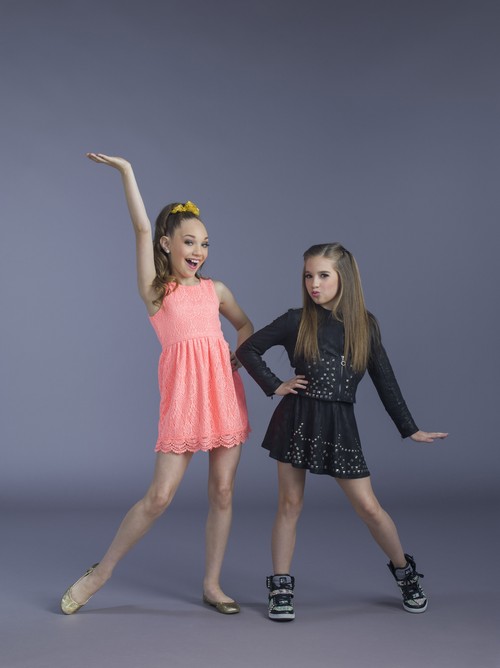 Tonight on lifetime Dance Moms continues with a new episode called, “Double the Moms, Double the Trouble.” On tonight’s episode, Abby kicks off the new dance season by bringing back her winning Select Team to compete against her original Elite Team in a rematch in Wheeling.

On tonight’s episode Abby kicks off the second part of season 4 by bringing back her winning Select Team to compete against her original Elite Team in a rematch in Wheeling, W.V., where Mackenzie is given a solo. Meanwhile, the original dance moms grow furious that Abby is once again favoring her new team.

Tonight’s episode is going to be another drama packed evening, which you won’t want to miss. So be sure to tune in for our live coverage of Lifetime’s Dance Mom’s Season 4 Episode 21 – tonight at 9 PM EST! While you wait for our recap, hit the comments and let us know how excited you are about the new season of Dance Moms tonight.

Tonight on Dance Moms Abby brings back her Select team to compete against her original Elite Team and abby rewards Mackenzie with a solo against Christy’s daughter.

The show starts with Abby working with her new team and their moms while the old team and their moms are in the waiting room watching. The old team is not very happy and Dance mom Jill thinks its not fair that Abby is paying so much attention to the new team and says it still won’t make them ALDC dancers. The old team comes in to the studio to join the new team. Back in Pittsburg, Abby sees it as double the mothers, double the problems and double the drama. She believes the kids on the original team will only be better with the new team joining them. Abby gives a speech and says the newbies are there to push the old team to the next level. She congratulates Maddie and puts them with the winning team and says its unfortunate that Sarah couldn’t join the group. She says she’s done with moms giving her lip but Sarah’s mom doesn’t dee it that way and says it was fair and calls the newbies phonies. She vows to get Sarah on the next competition team and prove to Abby that Sarah can be the next Maddie.

Maddie tells the group she went to LA last summer to be in a music video for Sia. Everyone claps and Abby says she  is looking for more Maddies. She points our that Kuilani is no longer with the group because her mother chose her boyfriend over her own daughter.

Abby reveals the pyramid that shows Kendall and Kalani who got beat in competition by 2 new girls. She shows Nia next who still has to improve on the basics. Next she shows Mckenzie who is a pop princess who has a #1 pop song and a video directed by Abby. Abby tells her to focus on dancing and not to get caught up in being a pop princess. Next she shows Maddie and tells her she needs to work with whoever she tells her to work with if she wants to succeed. At the top of the pyramid is Chloe is did amazing in the competition. Chloe’s mom is not impressed and accuses Abby of going to the judges and questioning Chloe’s win.

Abby reveals that they are headed to West Virginia to compete next with one routine called “Light as a feather stiff as a board’ and another routine called “Rapture.” She gives Mackenzie a solo and Sarah a solo to dance against Mackenzie which makes some of the moms made. Tina’s mom thinks her daughter deserves the solo and can beat Mackenzie any day.

The select ensemble starts practicing right away to their rapture routine. Abby sees it as a challenge for the group to show they can dance and win without Maddie. Christy throws her other moms under the bus by telling Chloe’s mom that she is on her side but all the other moms are not. Chloe’s mom, Christy, doesn’t care and doesn’t see the other Christy’s gesture as a nice  one but as a sign that she’s a backstabber.

The light as a feather stiff as a board dance is very dark and Chloe find that her role is very different than whats she’s used to. Christy thinks the new girls should just focus on their routine and not the other girls’ performance.

Mackenzie is working on her solo called “Watched me fly.” Abby tells Mackenzie that she needs to be off the chart because if Sarah beats her then she won’t be able to live it down.

Meanwhile the moms of the old team are pissed at Christy for throwing them under the bus for the new moms. They go back and forth and Christy isn’t phased by their threats and says they don’t have to like her but they will respect her. Abby works with Sarah on her solo and wants to see her really bring out the devil in her performance. She wants her to leaner how to performa and not just dance.

The moms speak to Abby about Sarah’s mom Christy and says that Sarah won’t be able to keep her head straight because her mother is crazy. Tia’s mom suggests that if she has to pull Sarah again that Tia know stye routine and can do it instead. This causes a huge argument when Christy overhears the conversation and tells the moms she’s not going anywhere. Tammy and Christy get really heated and start throwing blows and all hell breaks loose.

Meanwhile the girls are hard at work in the studio. They all gather in the studio to go over the dances. The mom’s watch as the select ensemble goes first with their routine “Light as a feather stiff as a board.” The other moms are worried because the select ensemble has a lot of girls in their teens and the moms feel this gives them an unfair advantage.

They all head to West Virginia and both teams want to win the battle of the ALDC round 2. The moms speculate that Abby didn’t kick any of the dancers and their moms out after the fight because if Tammy’s daughter was kicked out and the other 8 year then they wouldn’t be able to compete in the division with the Junior elite ensemble. Christy has a fit backstage because his believes Abby isn’t showing her daughter favor because some of the other girls have more dramatic makeup.

Backstage more drama is stirred up after the moms see the costumes for both ensembles. The junior elite moms are mass that their daughters have to wear pajamas on stage while the select ensemble has pretty costumes. The drama is cut short when Chloe falls on her face while the girls are practicing. She holds back the tears and takes the stage with her group. The new team, the select ensemble, takes the stage and performs “The Rapture.” They do amazing and Abby hopes this lights a fire under the junior elite team to fight back. They go out an fight for the top spot and kill the routine. Their moms are proud but aren’t sure it will be enough to beat the select ensemble.

The competition ends and the results are read. Sarah wins 4th place for her solo and her mom is proud. Mackenzie wins 1st place for her solo and her mom is thrilled. The junior elite ensembles win 2nd place and the select ensemble wins 1st place beating the old team once again. Christ says she is sick and says they were set up to fail. The moms meet backstage and give fake congrats to each other but the pleasantries doesn’t last long when the drama erupts once again. The old moms call the new moms desperate and exit. Abby comes in to find the junior elite girls upset that they came in 2nd and Abby tells them to get over it and stop being sore losers. Abby doesn’t want to hear what the moms have to say and leaves.