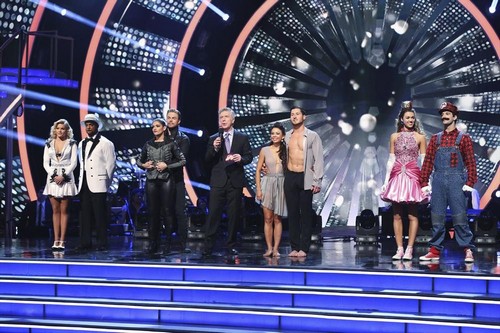 Tonight on ABC Dancing With The Stars 2014 continues with an all new Tuesday November 25, season 19 week 11 called “Grand Finale”. Tonight after weeks of fabulous performances a winner is announced in the 19th-season finale and we have your recap below.  On tonight’s episode we will also see the last dance of the season, the fusion dances; the return of eliminated contestants; and performances by Meghan Trainor, Nick Jonas, Jennifer Hudson and Gorgon City.

On last night’s episode, the four remaining couples competed in two exciting rounds of dance. In the first round, each couple took on the “Judges Pick” and performed a dance they previously performed this season that the judges had selected. In the second round, the couples took on the biggest competitive dance of the season, a Freestyle routine featuring special effects, additional dancers and unexpected surprises. At the end of night, one couple was eliminated based on the previous weeks’ viewer votes combined with the judges’ scores from the previous Monday night. Did you watch the last episode? If you missed it, we have a full and detailed recap right here for you.

On tonight’s episode, for their final dances as partners, the couples will take the “24-Hour Dance Challenge.” During this phase of the competition, the final three will be given only 24 hours to prepare a routine consisting of two dance styles they have learned this season. There will also be encore performance of one of the four finalists, based on Twitter votes by public. Additionally, other contestants will also deliver one encore performance each. It will be followed by the traditional 24-Hour Dance Challenge. Towards the end of the night, the results will be announced based on the public votes from Monday night and judges’ scores of “24-Hour Dance challenge.”   The final results will be announced based on viewer votes from Monday night and the judges’ scores of the challenge.

Tune in tonight at 9 PM EST on ABC to watch the stars all hit the ballroom. We’ll be recapping it for you live right here. In the meantime hit up our comments section and tell us who you are rooting for to win the Mirror Ball trophy for season 19 of Dancing with the Stars?

The Grande Finale starts with a medley from all the professional dancers and all the stars from this season join in on the spectacular performance.

The contestants in the finale had 24 hours to prepare for their routine tonight and at the top of the leader board last night was Alfonso Ribeiro and professional dancer Witney Carson. We now get a look back at last night’s performances and was nice to see Sadie and Mark’s great performance because it didn’t air last night.

Viewers voted last night to choose which performance they would like to see again, they choose Bethany Mota & professional dancer Derek Hough‘s performance.

We now rewind and get to see some great and not so great moments from this season as well as some special guests and even more special moments.

Nick Jonas returns to the stage now singing his new hit single, Jealous. It’s not Nick’s first time on the show. In 2008, during season 6, the Jonas Brothers performed a cover of the 1980s Aha song Take on Me.

Jonathan & Allison dance a Jazz routine with special guest, her husband Twitch from So You Think You Can Dance.

Now some R-Rated outtakes from this season; to fake judges messing up during dress rehearsal, Tommy ripping his pants off, butt slapping, Betsy upside down…

Michael Waltrip & professional dancer Emma Slater get back in the fast lane with their Cha Cha.

We take a look back at the episode about My Most Memorable Year and all the tears that transpired that night. Then the Switch Up when the stars had to mix partners. Then there was the night when Pit Bull guest judged and all the ladies were thrilled.

Next we get to see a rapping montage of Fresh Prince of Belair from the contestants. We follow up with an amazing performance from Jennifer Hudson teaming up with English electronic duo Gorgon City to perform a song called “Go All Night.”

The female professional dancers treat us to a special group performance.

Time for the finalists to perform one of their favorite performances of the season.

Meghan Trainor is on stage now performing a medley of “All About That Bass” and “Lips Are Movin”.

It is the final dances of the season, the fusion dances and these performances will make up the final scores.

Judges Comments: Len: “Yours is a Cinderella story, you came to the ball and never danced and you are leaving a dancing princess.” Julianne: “I hope you are so proud of yourself because we are proud.” Bruno: “Your charm always shines through.” Carrie Ann: “I love that you stuck to your game, you are an excellent role model.”

Judges Comments: Julianne: “That fusion was so seamless, I wanted it to keep going.” Bruno: “I love the way you both started and off you went, it was absolutely amazing.” Carrie Ann: “I am so happy this was your last dance, it was great, I am riveted by you.” Len: “You combine the how of the technique and the wow of the performance.”

Judges Comments: Bruno: “The amazing Alfonso, a real performer, you always give.” Carrie Ann: “I give you props Witney and Alfonso, you love to dance, you are like a glitter ball.” Len: “There is a naturalness about you – it has been like a wonderful story, we are on the last page and I still don’t know who is going to win.” Julianne: “Your connection is so on, you have done an amazing job.”

It is time for some results – one contestant is going to be crowned the winner of season 18 of Dancing with the Stars and take home the Mirror Ball trophy.

First, the couple who has landed short and is in third place:  Janel Parrish & professional dancer Valentin Chmerkovskiy