Dancing With The Stars Season 19 Finale 2014: Who Will Win The Mirror Ball Trophy? (POLL) 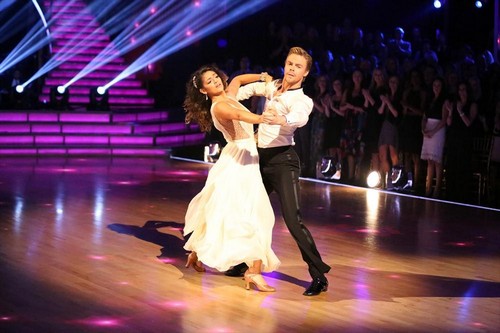 Dancing with the Stars season 19 has provided fans with some epic moves and drama. Soon, it will all come to an end and one couple will be crowned the winner. Have you been keeping up with this season of DWTS? Well, we definitely have been! If you’re a bit behind on the times, those still in the running for the Mirror Ball Trophy include Alfonso Robeiro/Witney Carson, Janel Parrish/Valentin Chmerkovskiy, Bethany Mota/Derek Hough, and Sadie Robertson/Mark Ballas. This is a really, really strong group of dancers, so it will definitely be interesting to see whose moves come out on top!

While this is our current four, only three couples will make it to the actual finale. Now, some people are saying that the couple who’ll most likely be eliminated is Robertson/Ballas, since they were in the most recent bottom two. While this fact doesn’t necessarily spell their demise, past scenarios have proven that oftentimes the couple in the bottom two is the couple that’s eliminated. I suppose we’ll see though.

Robertson does have the loyalty of all her Duck Dynasty fans, so maybe all that power will be enough energy beneath her wings to lift her into a final competition slot. What do you think about Robertson’s chances?

Who do you want to see win DWTS season 19? Take our poll below and feel free to leave your thoughts in the comments section below. We’d love to hear from you!