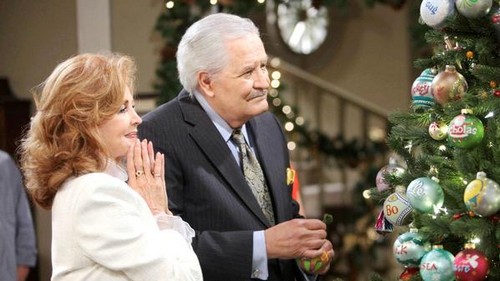 Nicole & Melanie: Seriously, is there a single woman in Salem that Nicole can get along with. When Days of Our Lives spoilers teased that Eric had a new love interest headed to Salem – we knew it wasn’t going to go over well with his ex Nicole. According to ABC Soaps in Depth, “Nicole says she has accepted Eric’s decision to move on, but as he and Serena continue to bond, the blond goes in to investigative mode to determine what her new rival is hiding.” DOOL comings and goings confirm soap alum Adam Mayfield will be arriving in Salem as someone from Serena’s past – perhaps Nicole brings him to town?

Kristen Sends Goons: It seems like Kristen DiMera has a goon for every occasion. Days of Our Lives spoilers tease that Kristen sends some goons to Salem to keep an eye on Theresa Donovan, little does Kristen know she should actually be worried about Melanie. Heading in to 2015 Theresa is rumored to finally realize that she was indeed pregnant, and something shady may have happened to her unhatched embryo.

Rafe Goes Rogue: Days of Our Lives spoilers tease that Rafe might finally get some action in the new year – it seems like we hardly see him anymore! According to the latest edition of ABC Soaps In Depth, “Kicked off the force again, Rafe finds a new way to make a living.” Considering Rafe’s police backgrounds – we’re going to assume he takes up some sort of private investigator gig…or maybe he just becomes a mall cap.

Hope & Aiden: Rumors have been flying around Days of Our Lives fan pages that Hope may be sharing a bed with a murderer – everyone is convinced that Aiden killed his first wife. According to Days of Our Lives spoilers, Aiden’s past will not be revealed until 2015 – but when it is revealed, it will be a doozie. The ABC Soaps Magazine teases, “Hope regrets having ignored her instincts when Aiden starts showing his true colors.”

Sonny & Will: With Will’s ex Paul Norita in town, and Sonny gallivanting around California for a month – WilSon fans knew that the young couple’s marriage would be in trouble. According to Days of Our Lives spoilers, “As the lies between them grow, Will and Sonny’s marriage begins to suffer. A concerned Victor will offer assistance, but alas that backfires big time!”
So Days fans, are you excited for an all new year of drama in Salem? Do you think Theresa will figure out that Kristen stole her baby? Did Aiden really murder his wife? Is this the end of Will and Sonny? Let us know what you think in the comments below and don’t forget to check CDL tomorrow for more Days of Our Lives spoilers and news.