Days Of Our Lives Spoilers: Eileen Davidson Returns As Kristen DiMera – Which DOOL Character Will She Kidnap? 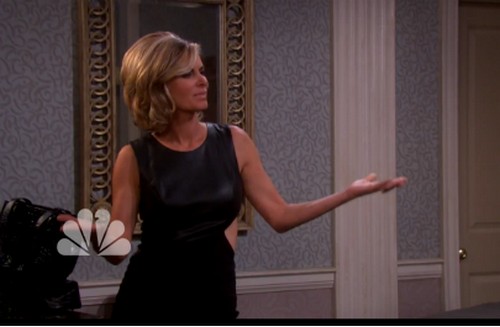 Days of Our Lives spoilers revealed months ago that Eileen Davidson would be returning to the NBC soap opera as the vixen Kristen DiMera. Davidson’s first air date is quickly approaching, and she is scheduled to arrive in Salem on July 25th. Kristen DiMera has been MIA since her car accident on her wedding day almost a year ago, when a video was revealed moments before she walked down the aisle to marry Brady, of Kristen and Eric having sex. It was revealed afterwards that Kristen had actually drugged Eric and basically raped him, and he was not a willing participant.

Days of Our Lives has released its first spoiler video featuring Kristen DiMera, and her highly anticipated return to Salem. The video teases, “She’s back, and no one’s lives will ever be the same.” In the promo you can see Kristen DiMera calling Brady and not saying anything, as he nervously asks “who is this” into the phone.

Anyone who remembers Davidson’s character Kristen can tell you that all hell will most likely break loose when she returns to Days of Our Lives. Kristen’s schemes were what drove Brady to party like a rock star for the last year. You would think that he has enough on his plate with his new wife Theresa framing him for his father’s attempted murder. Ironically spoilers for DOOL tease that during the week of July 21st Brady decides to turn over a new leaf and finally get himself clean and sober. The odds of him being able to stay sober once Hurricane Kristen rolls in to town are slim to none.

Days of Our Lives spoilers were recently released teasing that the first thing Kristen does when she returns to the soap opera is kidnap one of our favorite Salem residents. Considering how much of a loose cannon she is, it’s really anyone’s guess who she kidnaps. She might kidnap her ex Brady, or his new bride Theresa. She may go after Marlena since she was responsible for playing the video of Kristen raping Eric the day of her wedding.

So Days fans, how excited are you to see Eileen Davidson back as Kristen DiMera? Who do you think she will try to kidnap? And, how will she react when she finds out Brady is married to Theresa? Of course we all know that her story arc is by necessity of limited duration since Eileen has been stolen (back) by Jill Farren Phelps for The Young and the Restless. Let us know what you think in the comments below and don’t forget to check CDL tomorrow for more Days of Our Lives spoilers.