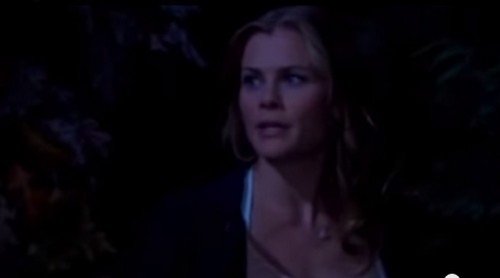 An all new Days of Our Lives spoiler video teases an explosive week on the NBC soap opera. In the DOOL promo EJ’s wife Sami Brady can be seen walking through Salem’s park in the dark. Suddenly a shot rings out and Sami spins around panicked and calls out EJ’s name. CDL just speculated last week that newcomer Clyde may try to take out the DiMera heir. He and EJ have been arguing over business deals for a few weeks now and Clyde vowed that he would “take care of” EJ. Judging from the spoiler video, he may have finally “taken care of” him. We also can’t count out EJ’s younger brother Chad who arrived in Salem with a chip on his shoulder when he learned that EJ slept with his ex-girlfriend Abigail. But, would he really kill his own brother over their affair?

The Days of Our Lives promo video for the week of October 6th also shows John lying in his hospital bed. He suddenly sits upright and announces that he remembers what happened to him, and he knows Theresa Donovan is the one who hit him over the head and put him in the coma. So Days fans, do you think EJ DiMera will be shot, and that is how James Scott is exiting? Who do you think murdered him? And what about Theresa, is she going to jail? Let us know what you think in the comments below and don’t forget to check CDL tomorrow for more Days of Our Lives spoilers!