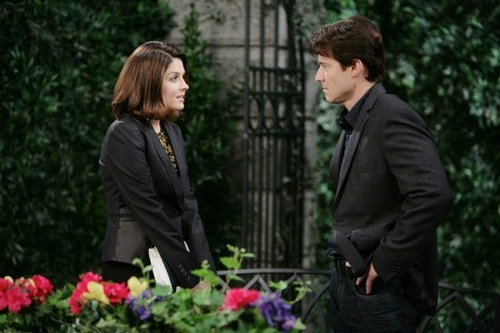 Some major plot points are starting to coalesce on Days of Our Lives, including Eric’s impending marriage to Nicole and Theresa’s realization of Liam’s obsession with Jennifer.

For those who haven’t been following the show closely, here’s some background. Eric Brady used to be a priest, but he was drugged and raped by Kristen DiMera while she had cameras rolling.  Kristen lost the sextape and someone picked it up and played it at Kristen’s wedding to Eric’s half brother Brady Black.  Kristen’s wedding to Brady was cancelled and Eric was pretty  much thrown out of priesthood.

Dr. Chyka was the one who actually provided the drug to knock out Eric, and Nicole Walker (Eric’s first love) and Daniel Jonas managed to figure out the truth. Nicole confronted Dr. Chyka at her apartment, but the doctor knocked her out. Unfortunately for the doctor, Eric also showed up to Nicole’s apartment at the same time, so Chyka also had to knock him out. He managed to kidnap both of them and tied them to a pole, and then proceeded to let gas into the room. They both thought they were dying, so they ended up professing their love to each other. However, both of them ended up getting rescued by Daniel not soon after, and Nicole and Daniel decided to track down where Dr. Chyka was hiding.

Nicole and Daniel manage to find Chyka and they get him to confess that he’s the one who drugged Eric. They tied him up while Daniel went to get help, but the doctor managed to get out his ropes and run away, knocking Nicole down in the process. Nicole is extremely upset that Chyka got away, because she was so determined to prove Eric’s innocence. But then, she manages to find Dr. Chyka’s paper documenting what Dr. Chyka did to Eric, but she doesn’t tell anyone.

When Eric professes his love for her, Nicole realizes that proving his innocence would only get in the way of their relationship, so she ends up shredding the papers. She thinks they are getting married, and she doesn’t want to do anything to jeopardize that, especially as Eric tells her that he wants to wait until they’re married to have sex. Obviously, proving his innocence would mean that he would be welcomed back as a priest, and then would never marry her.

Unfortunately for Nicole, Eric might be having second thoughts on this marriage all on his own. His conversation with his spiritual adviser pretty much confirms that. Eric tells Brother Timothy, “Nicole has been married an number of times and some of them would not quality for an annulment.” Brother Timothy replies, “The church would consider a marriage to someone like Nicole, wrong!” Eric then realizes, “A marriage to Nicole, a marriage the church will accept is just not going to happen.”

In other Days of Our Lives news, Theresa also finds out that Liam is obsessed with Jennifer. Theresa and Liam are out to lunch, and Liam is pretending that he likes her. However, Theresa tells Liam at lunch that she knows Liam’s not interested in her, but as he takes out his wallet to pay for lunch, a picture of Jennifer falls out. Theresa realizes that Liam is obsessed with Jennifer, and she tells him that. She also accuses him of bring the one who’s been behind everything that’s been happening to Theresa. I mean, the guy stole Jennifer’s underwear and lay there sniffing them, while fantasizing about something bad happening to Daniel. Clearly, he’s unhinged, and Theresa’s starting to realize that. As much as she has no love lost for Jennifer, how far would she be willing to let Liam go?

Update: Comments on Soap Opera Spy indicate that fans of DOOL want Theresa to nab Brady ASAP – to compete with Kristin for the substance abuser – will it happen?

Oh yes they would….but it will all blow up for them anyway…..and I hope Theresa hooks Brady before Kristin comes back,,,,now that would be a cat fight to watch….lol

Yes it would be epic…..writers heads up…..I could really go places with that theme…..all out war….