Days Of Our Lives Spoilers: Gabi Off To Prison – Nicole Blames Daniel For Losing Eric – EJ and Sami Ask Kate For Help 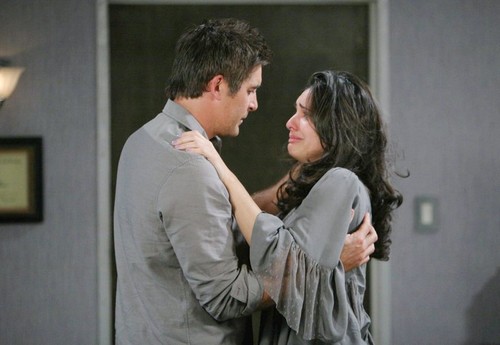 Days of Our Lives spoilers tease that June 9th-13th will be another week packed full of non-stop drama in the fictional town of Salem. Gabi Hernandez will spend the week saying her good-byes to her friends and family, and heartfelt moment will be shared with her daughter Arianna before she leaves Salem for good.

According to DOOL spoilers, one Salem resident surprises Gabi with a less than heartfelt good-bye. Julie is furious about Nick’s murder, and even more furious about the fact that no one in Salem seems to even mind that the Gabi assassinated her ex-boyfriend in cold blood. Julie makes it her personal mission to seek justice for Nick Fallon, and tries to make the charges Gabi is already facing even more severe.

Gabi’s brother Rafe blames himself for his sister’s sudden legal predicament, and feels like he has let his little sister down. If he had been keeping an eye on her and Arianna, then she never would have shot down Nick and wouldn’t be facing a lifetime in prison. According to DOOL spoilers for the week of June 9th, Rafe’s guilt effects his relationship with Jordan and he begins pushing her away.

Meanwhile, Nicole refuses to go down without a fight, and accept the fact that her engagement with Eric is over. According to Days of Our Lives spoilers, Nicole will not accept the fact that it is her own fault that Eric left her, and blames Daniel for her relationship’s demise. Daniel’s drama with Nicole begins to create a rift between himself and his own girlfriend Jennifer.

Days of Our Lives fans can also expect EJ and Sami to enlist the help of Kate while they try to deal with Stefano. And, Bev will try to set Paige up and take her down once and for all.

So, DOOL fans, are you ready to say goodbye to Gabi Hernandez for good? Do you think Rafe should feel guilty about letting his little sister commit murder, or was it out of his control? And, what about Nicole? Do you think she is taking it too far, or does she have a right to be angry with Daniel for interfering with her relationship with Eric? Do you think that there is a chance Eric might take Nicole back, despite what she did? Share your thoughts and theories in the comment section below and don’t forget to check CDL tomorrow for more Days of Our Lives spoilers.