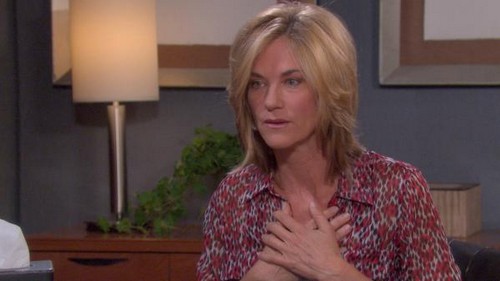 Days of Our Lives spoilers for the episodes airing during the week of November 10– 14 tease that DOOL fans will not want to miss a single soapy show. Rumors have been floating around the internet that John Black is exiting the NBC soap once again, and according to Days of Our Lives spoilers for the week of November 10, they are 100% true. Feeling extra rested after awaking from his coma, John announces he is leaving Salem and says a heartfelt goodbye to Marlena.

According to DOOL spoilers, John (Drake Hogestyn) and Marlena’s relationship may be over before it ever really started again, but sparks will be flying between some other Salem couples. Hope and Aiden (Daniel Cosgrove) have been slowly building a relationship over the last couple of months, and during the week of November 10th they will finally take their relationship to the next level when they decide to make love. Sparks are also flying between Jordan (Chrishell Stause) and Chad DiMera (Billy Flynn). But, when Rafe catches them sharing a hot kiss he suddenly realizes he is still madly in love with the physical therapist and decides he wants to win her back.

In other Days of Our Lives news, JJ is a hot and distraught mess after having sex with his girlfriend Paige’s (True O’Brien) mother Eve Donovan. The guilt finally becomes too much for JJ to handle, so he confesses to Daniel what he has done. And, after receiving some advice from his mentor, JJ marches over to Eve’s (Kassie DePaiva) house on November 14th to confront her.

So, Days fans, are you as sad as we are to see John Black leave the NBC soap? How wierded out are you by JJ and Eve’s hook up? Do you think it will happen again or was it a one time thing? Who do you think Jordan belongs with – Rafe or Chad? Let us know in the comments below and don’t forget to check CDL tomorrow for more Days of Our Lives spoilers and news.