Days of Our Lives Spoilers: Theresa Donovan Is Busted – Brady Learns He Is Innocent from John Black 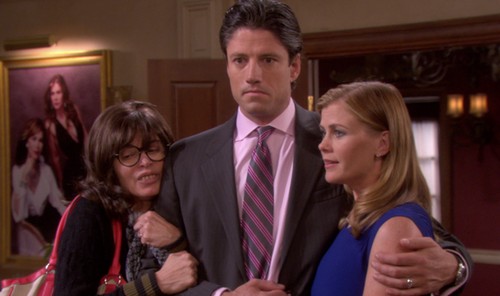 Days of Our Lives spoilers recently revealed that John Black was waking up from his coma; however, the question of whether or not his memory is working at full capacity is another story. If John Black does remember the events leading up to his coma, then a few Salem residents’ lives will be drastically influenced. Right now, Brady Black believes that, in a drunken stupor, he assaulted his own father and hit him over the head with a fire poker. And Theresa Donovan thinks she committed the perfect crime–by pinning John Black’s assault on his black-out drunk son who doesn’t remember what really happened.

However, Days of Our Lives spoilers tease that john Black might know a lot more than everyone realizes about the night he was attacked. In an all new Days of Our Lives spoiler video, Theresa brags to someone that John Black doesn’t remember a thing about the night she hit him and she is in the clear. Meanwhile, Brady is sitting at John’s bedside in his hospital room and reveals to his father that he is the reason he was in a coma. Brady confesses to John, “I hit you.” John shocks his son by placing his hand on his shoulder and informing him, “you didn’t do that.”

It looks like Theresa Donovan’s jig is about to be up. She obviously has underestimated John and his memory of the nights leading up to his coma. DOOL spoilers tease that John requests a private meeting with Theresa: if he remembers what she did, all hell could break loose in that hospital room. But, we can’t help but wonder, if he remembers what she did, why doesn’t he just go straight to the police? What could he possibly need a face-to-face with his attacker for?

What do you think, DOOL fans? If John does remember that Theresa is the one who attacked him and put him in a coma, then what is his game plan? Is he going to have her arrested or try to seek revenge? Let us know what you think in the comments below and don’t forget to check CDL tomorrow for more DOOL spoilers.