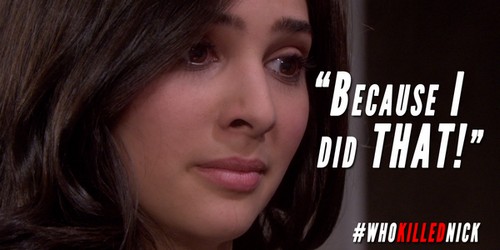 Days of Our Lives fans got the shock of a lifetime on May 30th when the ongoing case of who killed Nick Fallon was finally solved, and Gabi Hernandez confessed to the crime. DOOL spoilers for the week of June 2nd tease that Gabi will come clean about Nick’s murder and her motives behind the shooting.

Camila Banus will be preparing her Days of Our Lives exit, as her character is shipped off to prison. According to Days of Our Lives spoilers, Gabi will confess something else before she leaves Salem, and it will have a nasty ripple effect on some of the residents.

John Black will make an appearance during the week of June 2nd, Days of Our Lives spoilers tease that he will make another last ditch attempt to separate Theresa and troubled son Brady. John’s plan backfires and Brady revolts, resulting in a can’t miss father and son brawl.

While the majority of Salem is dealing with the shocking news of Gabi’s confession, Nicole will spend the week of June 2nd trying to make amends with Eric and get their engagement back on track. It’s safe to say they won’t be eloping or getting married anytime soon. And, according to DOOL spoilers, Eric isn’t going to forgive Nicole for hiding evidence that could have cleared his name any time soon. Nicole and Eric’s relationship may be coming to an end, but there is another Salem couple popping up. Days spoilers tease that Hope and Aiden share a close moment during the week of June 2nd.

Unfortunately Days of Our Lives will be preempted on June 5th and 6th. But, judging by the weekly spoilers there will still be plenty of DOOL drama. What do you think the other secret is that Gabi reveals before she is shipped off to prison? Do you think that she will implicate Sami and Kate and reveal that they helped her try to kill Nick Fallon in 2013? Share your thoughts and theories in the comment section below and don’t forget to check CDL tomorrow for more Days of Our Lives spoilers.

Also if I were nicole I’d be sooo p’sd at Dan and Jen I would say thanks and since u 2 r so sanctimonious and honest and honorable I guess I better come clean about my lies about what happened with JJ.

gabi is also to reveal another secret so maybe she finally comes clean about the melanie thing.

Why the preempted on the 5th and 6th?? Are they going to repeat the shows the following day??? Hope so!

Not sure I know they are preempted for the French Open.

There are so many people leaving this show but it looks like somehow it hasn’t been cancelled, but how do you lose 5 main characters and keep going?

I knew Gabi did it!!

The issue of how Days will compensate for all of the stars who are leaving the show and if NBC is committed to the daytime drama are open questions. We’ll work on getting the answers for you.