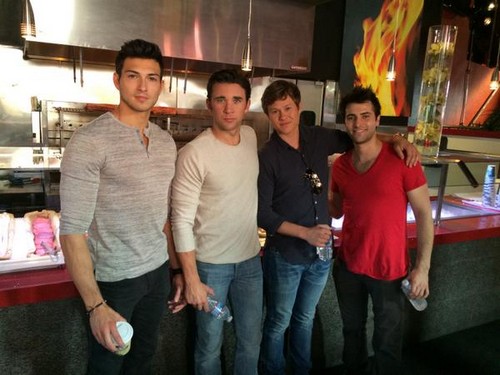 Days of Our Lives spoilers tease that Chad DiMera will be stirring up some major drama on the NBC soap during the month of November. Since Chad returned to Salem, DOOL fans have been a little unsure about where the youngest DiMera’s loyalties truly lie. Rumor has it Chad is working with Stefano and playing Kate Roberts to try and regain control of the family business, but on the other hand – Chad seems to genuinely be trying take down his scheming father. It’s really anyone’s guess what Chad’s true agenda is.

Days of Our Lives spoilers and news tease that during the month of November Chad DiMera’s true colors and true intentions will begin to become clear. According to DOOL spoilers, Chad is manipulating both Kate Roberts and his father Stefano and at the end of the day he is only on one team – his own. Before the month of November is over, Chad will betray both Kate and Stefano, and he will even go as far as to blackmail Kate so that he can gain control of DiMera Enterprises. His big brother EJ would be so proud!

We all knew it was only a matter of time until Kate Roberts was ousted from the company, especially now that EJ is dead and Sami Brady has run off to Hollywood. And when Days of Our Lives spoilers revealed Chad DiMera was returning to Salem with an agenda – it was pretty clear he was going to go after his family’s business, so we’re not exactly surprised by the fact that he is going to turn on Kate and Stefano. Do you think we may have underestimated Chad a bit, or did you know all along he would pull something like this? What do you think he blackmails Kate over? How will Stefano react? Let us know what you think in the comments below and don’t forget to check CDL tomorrow for more Days of Our Lives spoilers and news.