Days of Our Lives Spoilers: Alison Sweeney’s Final Air Date, Sami and Will Head Off to Hollywood, Kristen Tells Brady of Theresa’s Guilt 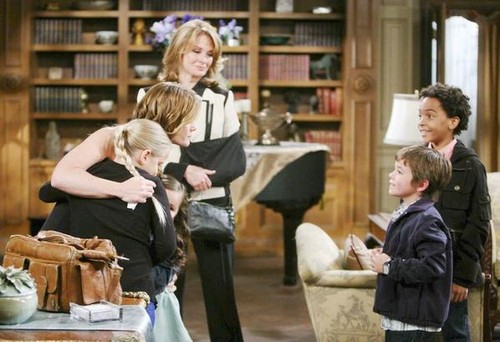 Days of Our Lives news and spoilers reveal a week of drama-packed episodes during the week of October 27. There will be lots of DOOL comings and goings during the final week of October, a new cast member makes her Salem debut as another iconic character bids the NBC soap adieu.

Monday October 27: According to Days spoilers, Sami Brady (Alison Sweeney) will share a heartfelt moment with her brother Lucas as she informs him of her future plans and that she is leaving Salem for good. Meanwhile across town, future soap super couple Chad DiMera (Billy Flynn) and Jordan share their first kiss.

Tuesday October 28: Days of Our Lives spoilers for the October 28 episode reveal that Kristen DiMera continues her crusade against Theresa, and informs Brady that he was framed by his wife and she actually is the one who put John in a coma. Paige corners the prostitute that her mother hired to seduce JJ in search of answers, and Daniel and Jennifer have another blow-up.

Wednesday October 29: Will informs his hubby Sonny that he is leaving town to pursue his writing career, and it does not go over well. John and Theresa have a heated debate about her assaulting him in his hospital room, and unbeknownst to them Brady is listening outside with his ear against the door

Thursday October 30: DOOl spoilers reveal that October 30 is Alison Sweeny’s official final air date as Sami Brady as she packs up her kids and heads to Hollywood. And, she takes Will along with her to write her tell-all script on her life as Sami Brady, wife of the EJ DiMera. While Sami is saying her goodbyes, a new face arrives in Salem, soap star Marie Wilson will be introduced as the character Bree.

Friday October 31: Feeling foolish Brady has no choice but to admit to Kristen DiMera that she was right all along. Across town Eve Donovan and Kayla have a heated confrontation over Jack Deveraux, and Eve is disgusted that Kayla is actually defending him.

So Days fans, are you ready to say goodbye to Sami Brady? Can you believe that Will is actually leaving Sonny and going to Hollywood with his mother? Rumor has it newcomer Bree is from Aiden’s mysterious past, how do you think in the characters are related? And, what will Brady do to Theresa now that he knows the truth? Let us know what you think in the comments below and don’t forget to check CDL tomorrow for more Days of Our Lives spoilers and news.