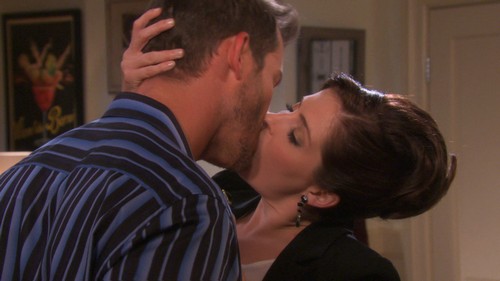 Brady Black has been struggling with his drug addiction for years, but is he finally about the cross the line of no return? On this week’s episodes of Days of Our Lives, Salem’s latest token bad girl Theresa Donovan tempts Brady with cocaine, attempting to keep him with her by using drugs as leverage.

Brady seemed to be doing fairly well with staying clean until his trysts with Kristen DiMera. Since then, it seems like Brady’s been slowly and steadily descending into the downward spiral of addiction. However, instead of reverting to cocaine use, Brady’s instead been drinking booze – a lot. I suppose you could say that shows some level of self-control on Brady’s part, but that might not last that much longer if Theresa has her way with him.

Brady and Theresa have started hooking up, but Theresa knows it’s only a matter of time before Brady loses interest. So she decides to tempt him with cocaine, knowing that it’s his weakness. Considering that Theresa’s also an addict, this relationship could spell a toxic spell for Brady and his health, not to mention Theresa’s future in Salem. After all, how long does these kinds of relationships last, even in real life? Theresa’s using Brady, and Brady’s using Theresa, and that’s not even considering their mutual addictions and unhealthy relationship with each other.

Fans hate Theresa and want Brady to get rid of here ASAP – a typical comment was:

Do you think there’s any way that Brady will come out of this situation unharmed, perhaps pulling Theresa out with him? Is there any hope for Brady or Theresa? Are they worth saving? What do you guys think? Let us know your thoughts in the comments.