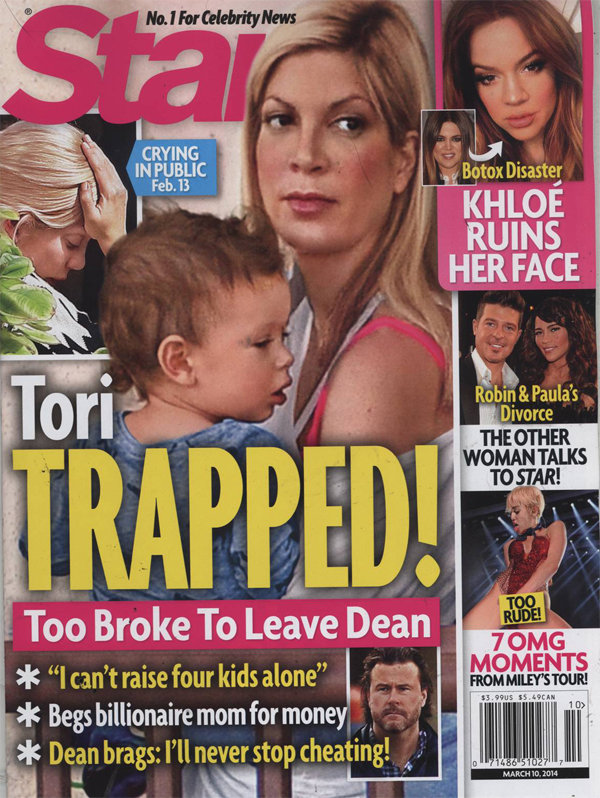 The latest cover issue of Star Magazine focuses on the broken marriage between Dean McDermott and Tori Spelling. Star’s source claims that Tori’s too ‘broke‘ to leave Dean, despite the fact that he publicly cheated on her and humiliated her, probably not even for the first time.

There’s also the fact that she’s too scared to leave the marriage and end up raising four children alone, even though Dean will never stop cheating. In fact, sources add that Dean’s even bragged to his friends that he’ll never stop cheating. There are already rumors of Dean flirting with other women in rehab, for goodness sake. You know the saying ‘once a cheater, always a cheater’ is very applicable here, although Tori’s not staying with him out of love, just practicality. She already had a taste of being a single mother while Dean checked himself into rehab, and sources explain that she hated it – she hated taking care of her children alone, and she hated juggling her family and her career [she has a new ABC Family show coming up]. Oh, boo freaking hoo. So many women manage to do it just fine, and I’m sure she’d be able to get a solid check from Dean every month for child care. Plus, how broke can she really be if she has another TV show coming up?

However, sources add that Dean’s also financially dependent on Tori, which makes more sense. The sources explain, “Dean has bragged to his buddies about all the attention he gets from women. He wants to work things out with Tori because he needs her financially. But privately, he’s said he’s not sure he’ll ever be able to stop cheating on her.” Well, if he hasn’t stopped by now, I doubt he’s going to stop in the future – and I think Tori realizes that. But she’s staying with Dean because she needs him, and I don’t think that’ll change anytime soon.

Star also has a story on Khloe Kardashian‘s botox disaster, which isn’t unexpected considering that she’s a Kardashian. Getting plastic surgery for them is like us normal human beings getting our teeth checked every six months.