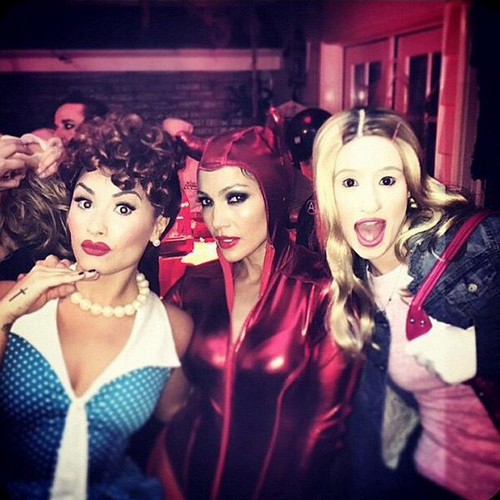 Demi Lovato attacked Selena Gomez on Twitter, apparently out of the blue, so one has to wonder if Demi is still sane and sober – after all Selena is an innocent sweetie-pie, no? Demi Lovato and Selena Gomez haven’t been best friends in a long time, but it seems like there’s more to the story than meets the eye. Demi Lovato uploaded a series of cryptic tweets that seemed like they were targeted towards Selena Gomez, in regards to her new single ‘The Heart Wants What It Wants’.

We already know the single was about Justin Bieber, since Selena herself admitted that. However, right after Selena’s new single dropped, Demi tweeted, “Just when your mind finds resentment in someone, pray for their success, their health, and their happiness no matter how hard it may be.”

Fans have obviously come to the conclusion that Demi is talking about Selena when she discusses ‘resentment’, but the real question is – why? Is it possible that Selena Gomez has alienated every single one of her friends over her relationship with Justin Bieber? We know Selena and Taylor Swift had numerous fights over this very reason, but is Demi one to talk? She’s dated Wilmer Valderrama, for goodness sake. Wilmer is barely above Justin on the douchebag totem pole, and that’s not saying much. Of course, there does seem to be a modicum of jealousy and professional rivalry in that post, since ‘resentment’ seems like a strong sentiment to have for someone who’s dating a dude you don’t like. They’re clearly no longer friends, but it can’t all be about Justin Bieber, can it?

What do you guys think? Is this Selena Gomez/Demi Lovato feud due to something other than Justin Bieber, or do you think Demi Lovato’s tweet was taken out of context? Let us know your thoughts in the comments below.