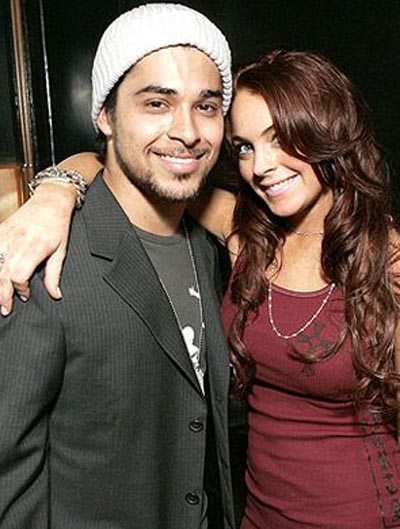 Thanks to a [not very] shocking cover reveal of this week’s In Touch Weekly, we know that Lindsay Lohan and Wilmer Valderrama hooked up. Whether Lindsay was making it up or not, people now believe that this happened, including Wilmer’s current girlfriend, Demi Lovato.

Wilmer has been promoting his new show, From Dusk Till Dawn, and Demi took the opportunity to tweet her support for him, writing, “I’m so excited for #FromDuskTillDawn – @WValderrama I couldn’t be more proud of you.. This is your night!!! Congrats my love!! Besitos.”

For someone as private as Demi purports to be, what spurred on this momentary public declaration of affection? Could it be that she’s feeling insecure about the allegations regarding Demi and Wilmer? Let’s face it – nobody wants to be linked to Lindsay Lohan, and nobody wants their boyfriend to be linked to Lindsay Lohan. I can only imagine the conversations, and the STD checks that would immediately follow those conversations.

However, with Demi’s newfound emotional stability, will she be able to stay with Wilmer knowing he hooked up with Lindsay? Sure, the guy was going through a rough period after That 70s Show wrapped, and he might have hooked up with Lindsay during a dark moment in his past. But he’s also a C-list actor who’s clinging to his fame by dating Demi, and Demi really deserves better. She doesn’t deserve Lindsay’s cast-offs, and I think she’ll start to realize that, sooner or later. Besides, I don’t think her insecurity issues have fully gone away, and eventually, the fact that Wilmer hooked up with Lindsay is going to cause her to pull away.