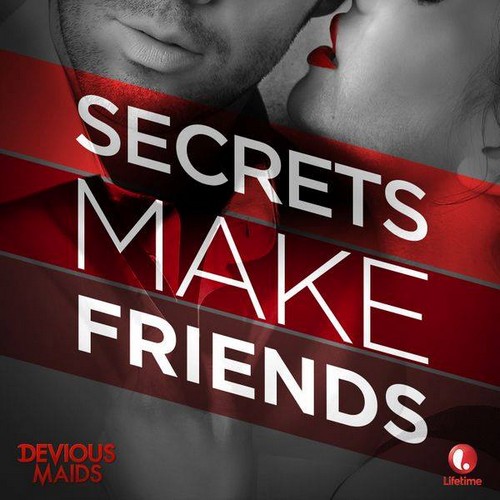 Tonight on Lifetime DEVIOUS MAIDS continues with a new episode called, “The Dark at the Top of the Stairs”. On tonight’s episode Carmen feels threatened, Zoila helps Valentina wither her job. Rosie begins a new job; Marisol tries to makeup with Opal. Peri threatens Spence to keep him in their marriage. Adrian tries to cope with a home invasion.

On the last episode three months had passed, and Marisol had found a new love. When Peri discovered that Rosie is back in the U.S., she went to great lengths to keep Spence and Rosie apart. Zoila learned through Genevieve that Valentina was back from Africa. As Carmen and Alejandro settled into their fake relationship, Odessa reached her limit. After a traumatic event at the Powell home, Adrian and Evelyn hired a handsome bodyguard, Tony.  Did you watch last week’s episode?  If you missed it we have a full and detailed recap, right here for you.

On tonight’s episode Carmen feels threatened by an old flame from Alejandro’s past and goes to great lengths to insure that her career isn’t in jeopardy; Zoila helps Valentina with her job but ignores problems at home; Rosie begins a new job with a dysfunctional family; Marisol tries to make peace with Opal; Peri threatens Spence so he will stay in their marriage; Adrian copes with a home invasion but fails to protect Evelyn in a dangerous situation.

Tonight’s episode is going to be another fun one, which you won’t want to miss. So be sure to tune in for our live coverage of Lifetime’s Devious Maids Season 2 Episode 2 — tonight at 10PM EST! While you wait for our recap.

Tonight’s episode of Devious Maids begins with Peri at her Doctor’s appointment. She actually isn’t pregnant, she lied, and now she is trying desperately to become pregnant. When she arrives home Spence confesses to her that he was having an affair with Rose (which she already knew), and he informs her that he is leaving her to be with their ex maid.

Meanwhile Rose is meeting the new family she will be caring for. Kent had a stroke and doesn’t speak-he’s in a wheelchair. His wife Dede, who is less than half his age (and an ex stripper) spends the entire meeting bickering with his daughter Lucinda, they clearly despise each other.

Zoila is furious when she finds out her daughter Valentina is working as a live-in maid now for Evelyn and Adrian.

Alejandro introduces Carmen to an old friend of his named Dario, who clearly used to be more than just a friends. Carmen is annoyed because everyone at the party can tell they are flirting with each other, which makes it really hard to be his beard.

Evelyn is walking down the street with her friend when she spots a homeless woman wearing her ruby necklace that was stolen from her last week. She attempts to hold down the woman and get her necklace back, but she escapes.

Carmen gives Alejandro the third degree the next morning. She tells him if she is going to “have sex with boys from now on he has to do it at home so she doesn’t worry.” Alejandro confesses that Dario was the “one that got away.” Dario invited him to move to Spain with him, he says he is considering and their wedding might be off.

Rosie meets Lucinda in the kitchen and she begins ranting about Dede. Rosie says that she doesn’t want to take sides, but Lucinda reminds her she is being paid to choose sides…her side.

Zoila arrives at the Powell house and barges and announces to Valentina that she has come to pack her bags and take her home. Valentina informs her she won’t be returning and to stop trying to control her. When Valentina turns around Zoila steal a Faberge egg off the counter and slips it into her purse.

Nick arrives home and finds his house cluttered with Marisol’s boxes that have arrived with all of her stuff. She informs him that Opal wouldn’t let her use the closet because it had Dalia’s things in it and Opal insisted that she ask Nick for permission. Nick makes it clear he could care less about Dalia’s things and says he is sending them to Goodwill tomorrow.

Valentina is taking a break from cleaning the Powell’s mansion and pouring herself a drink and the pool boy Ethan approaches her and says they “need to talk.” Ethan tells her that her Mom stole the “egg thingy” and Valentina puts two and two together and realizes her Mom took it so that she would be fired.

Marisol sits down with Zoila and Rosie and rants about Opal and how she wants to have her fired. Zoila advises against it.

Spence tells Peri he spoke to his lawyer and he isn’t going to come after her for alimony. Peri informs him they aren’t breaking up. She threatens to move Tucker to Europe and destroy his daytime drama career if he leaves her for Rosie. She declares, “people don’t leave stars for maids.” She also confesses to him that she isn’t pregnant.

Marisol heads home and tries to talk to Opal, she reveals that she worked as a maid for 6 months so she respects her job. She apologizes for getting rid of Dalia’s stuff without asking her. Opal begins crying and says that Dalia took her in when she was nineteen and pregnant and she was her best friend. Marisol says that thye should start over.

Tony finds the homeless woman in the alley wearing Evelyn’s necklace. She insists that someone gave it to her.

Rosie is getting Ken ready for his birthday dinner with Reggie, DeDe, and Lucinda. Rosie surprises the family by dressing Ken in one of his good suits before she wheels him out to the table. DeDe and Lucinda begin arguing over who Rosie works for, Ken musters up all of his strength and punches the table. Rosie smiles and says she doesn’t work for DeDe or Lucinda, she works for Ken.

Zoila arrives at home, and her husband Pablo is furious. Valentina called and told him that her Mom stole the Faberge Egg. He yells at her and tells her he is tired of her trying to control his and Valentina’s life.

Tony surprises Evelyn with her ruby necklace and she is ecstatic. She asks how she can ever repay him, but he insists that “seeing her smile” is payment enough.

Rosie is watching television and sees a report and Spence and Peri broke up. She rushes to his house to check on him, he says that he can’t talk and he “can’t see her again.” He informs her that he is losing her family because of her and she has to stay away and then he shuts the door in her face. Peri is standing around the corner listening in and smiling.

Nick is getting ready to leave on a trip for a week, he is a little nervous about leaving her alone with Opal that long. Marisol reassures him they will be fine and they are practically besties. As she is cleaning out the closet full of Dahlia’s things she finds a letter that was left on the top shelf. It says, “Given all that you said I don’t care what you have to do, get Opal out of the house. Love, Dahlia.”

Carmen is still throwing her engagement party, despite the face that her fake fiancé is out with Dario and told her he wants to leave the country with him.

Zoila returns home and finds that Pablo has packed a bag. He says he needs some space and he is “taking a break” and moving into a small apartment. He promises her it is going to be good for both of them.

The guests are arriving and Alejandro is hammered. Carmen tries to turn their engagement party into a wedding so that Alejandro doesn’t leave her for Dario. Alejandro drags her down the hall and asks her what the hell she is doing. She cries to him that if they don’t get married she won’t get any of the things that was promised in their contract. He reassures her that he will honor the contract regardless of whether they are married.

While they are talking they hear a raucous peer over the balcony at the engagement party. Men have barged in wearing ski masks and are robbing the guests just like the Powell’s house. One of the burglars fires his gun up in the air and shoots Alejandro in the chest. The burglars run out when they realize they have killed someone and Carmen sobs over his body, and probably her contract which she can definitely kiss goodbye now.