BY Amanda Austin on May 25, 2014 | Comments: one comment
Related : Recap, Television 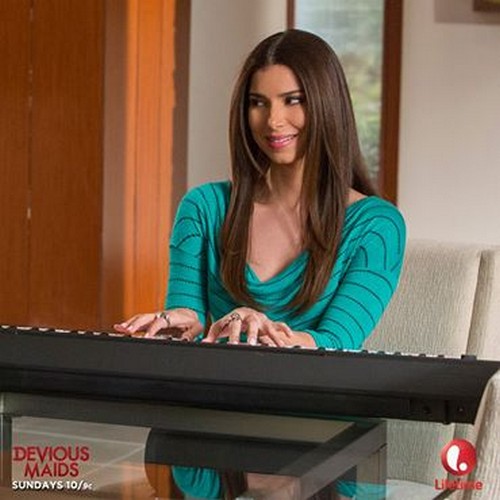 Tonight on Lifetime DEVIOUS MAIDS continues with a new episode called, “Private Lives.” On tonight’s episode Marisol discovers more secrets about Opal; Rosie tries to help Lucinda but it leads to further strife in the Miller family; Carmen prepares for a performance; Zoila goes on a date; Genevieve interferes with Valentina and Ethan’s relationship.

On the last episode Nicholas was jealous over Marisol’s growing friendship with her book editor. Lucinda crosses the line with Rosie. A new visitor creates problems for Carmen. Tony makes a decision that doesn’t sit well with Evelyn. Things get complicated for Valentina and Ethan.  Did you watch last week’s episode?  If you missed it we have a full and detailed recap, right here for you.

On tonight’s episode Marisol discovers more secrets about Opal. Rosie attempts to help Lucinda, which only leads to further strife within the Miller family. Carmen prepares for a performance. Zoila tries to move on from her husband and goes on a date. Genevieve interferes with Valentina and Ethan’s relationship.

Tonight’s episode is going to be another fun one, which you won’t want to miss. So be sure to tune in for our live coverage of Lifetime’s Devious Maids Season 2 Episode 6 — tonight at 10PM EST!

Even though he warned her – Marisol can’t stop digging into Dalia’s past. She knows her future husband doesn’t want to discuss his ex-wife so she wisely chose not to push him for answers. Anyway why got to him when she knows she can go to Opal. Thus far Opal has been the fountain of information for all things Dalia so Marisol was hoping that Opal would also know who Dalia had an affair with. Although soon after Opal was asked she unfortunately had an accident. She was so thrown by the question that she ended up falling off a ladder.

So maybe asking someone to reveal personal information while they’re cleaning a chandelier was probably not the best idea.

Another bad idea was Rosie’s decision to help Lucinda. The other woman has been nothing but kind to her since she revealed her big secret and was finally able to openly grieve for the daughter she put up for adoption. So to return the kindness, Rosie wants to reunite her new found friend with the daughter she lost. She even interrupted their date to ask Reggie for help. Although he comes off as a tad too excited at the idea. As if he knows that it’s not Rosie’s brightest and still wants to go through with it.

Recently Lucinda has begun to question why her father’s stipend has unexpectedly stopped and Reggie has been putting her off. Does this have anything to do with why he’s excited at finding his cousin’s daughter? Is he hoping to distract her for some reason?

Meanwhile Zoila has also gotten back into dating. She met some pompous chef at the market and they started trading barbs. Then out of nowhere those insults turned into flirtation and now she has a date. But Genevieve has way too much on her hands to help make sure this date is a success. Currently she’s too busy trying to get Valentina and Remy back together. And the only thing standing in her way was Ethan.

Luckily the problem was quickly fixed. Once Genevieve found out that he had been wait-listed to a school on the east coast – all it took was pulling some strings and voila – Ethan has been accepted into Brown. And because everyone knows that long distance relationships don’t last then Valentina will have to (one way or another) end hers with Ethan.

However she hadn’t counted on Valentina seeing through her manipulations. Valentina understands why Genevieve did it, but she made it clear to mom #2 that she’s going to live her own life so it’s best if the other woman simply backs off.

After her chat with Genevive, Valentina was happy to put the whole episode behind her while Ethan elected to let Remy have a piece of his mind. Remy didn’t have anything to do with his mom arranging for Ethan to be sent away, but that doesn’t seem to matter to Ethan. Why? Well, he doesn’t exactly appreciate being nearly bought off. So he Remy that he got what he wants and no one is going to make him give her up.

But prior to their little scene, Remy was actually considering letting Valentina go. He changed his mind on that score after meeting Ethan and realizing how much of a jerk that guy was.

Genevieve was able to pull her head out of her son’s business long enough to find out what’s been going on with Zoila. And thank god she did. Zoila agreed to a date at the chef’s house and it wasn’t until her boss pointed it out that she realized her date might have certain expectations.

Zoila worked herself up into a state wondering if she had to give up sex on the first date. Although she did get off lucky. Her chef was the perfect gentlemen. He didn’t want to push Zoila into something she wasn’t ready for.

As for Marisol, she’s thinks she knows who Dalia was having an affair with. She found some scintillating evidence in Opal’s room when she was supposed to be helping gather some clothes for Opal’s hospital stay. She found a locked drawer and with Carmen’s help was able to open it. Inside were photos of Dalia and skimpy negligee.

Marisol shared her news with her friends and they all drew the same conclusion. They think Dalia had a lesbian affair with her maid!

Marisol wants to talk to Nick about it. But if he kept her on this long then it would serve her own interest to get Opal to back off judging her. Marisol cleared out Opal’s drawer. She wanted the other woman to know that she now had the advantage.

Rosie ended up finding Lucinda’s daughter and she united them to mix reviews. The daughter, Natasha, hit her mother upon first meeting her. According to the younger woman, she tried contacting her birth mother four years ago and was told back then that she wasn’t wanted by her grandfather of all people. Lucinda was able to convince her that she never knew about the earlier incident and the two women managed to have the loving reunion they were always supposed to have. But Lucinda was ready to give up her anger at her father.

Lucinda nearly killed her old man and would have gladly done it in front of his trophy wife if hadn’t been for Rosie. Rosie said the one thing that could calm down her boss’s daughter. She told her if she went to jail then she would have lose out on her new found relationship with her daughter.

Later, Reggie used that violent and disturbing scene to his best advantage. He persuaded his uncle into believing that Lucinda no longer had the older man best interest at heart. So Kenneth took back power of attorney away from Lucinda and gave it to his beloved nephew. The same nephew we now know is up to no good!

Speaking of intentions, Ty helped Carmen with her musical showcase. He gave up his poetry so that she may use it as lyrics. He did this as a favor but after witnessing Carmen onstage – he realized just how great Carmen is. As in he’s developing a crush on the woman whose life he helped ruin.