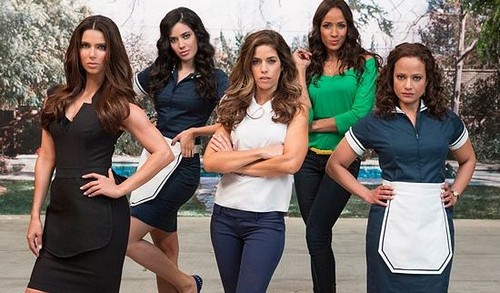 Season 2 of Devious Maids returns on April 20th, and it’s packed to the brim with new households, new jobs, and new lives for its titular characters. We have plenty of spoilers for this season, so let’s kick it off with a little murder mystery.

Flora’s murder was already resolved at the end of last season, but we’re given a new mystery this season when a rich man named Nicholas Deering is introduced, and then his wife mysteriously jumps off a bridge. Nicholas’ live-in maid, Opal, and her teenage son might know a little something about his wife’s jump off the bridge, but the whole situation’s about to get a lot more complicated because of the new lady in Nicholas’ life: Marisol!

Marisol will apparently be sporting a completely different look this season, one that’s far more elegant than her look last season. However, Marisol is still suck in the same situation: she’s in a household full of secrets and mysteries, and she’s put right in the middle. However, her former employer Taylor will reportedly be returning for a brief period as a guest star this season, so perhaps she lends Marisol some much-needed advice?

Meanwhile, the Powells are back from their vacation but they’re met with a scary accident when they return home, causing them to hire a bodyguard named Tony. But will Tony’s presence only serve to complicate matters?

There’s also Adrian’s crippling fear and anxiety, and his inability to protect Evelyn when they find themselves in a ‘semi-dangerous situation‘. But how will Evelyn respond to this? Probably not too well.

Finally, Genevieve tries to distract herself from Phillipe’s death by involving herself in Zoila’s problems. Meanwhile, her other employee, Valentina, has just returned from Africa but instead of returning to work with her mother, decides to take up a position with a rival family. However, Zoila’s response to the situation reportedly make things a lot worse, when she tries her best to get Valentina fired. This, in turn, makes Zoila’s husband furious, which then causes their marriage to start breaking apart. Dun dun dun.

It’s also interesting to note that Susan Lucci, who plays Genevieve, reportedly just received a very lucrative offer to play a regular role on the Young and the Restless. Will she stay on the Devious Maids, or will she depart to Y & R for good? It’s doubtful that she’ll be able to stay as a regular on both shows, but her choice no doubt depends on a lot of other factors.

There’s also going to be an introduction of Devious Maids’ first ever African-American family, and producer Marc Cherry reveals, “It’s Cat on a Hot Tin Roof. It’s an older main in a wheelchair, his 40-year-old daughter, and his 29-year-old wife – and they are at each other’s throats.”

Also, closeted pop star Alejandro will have second thoughts about Carmen bearding for him by posing as his fiance. For one, Odessa [his ailing maid] reportedly has feelings for him, and then, so might Darius, his fling from a previous episode that he reconnects with in an upcoming episode. Will Alejandro choose to keep Carmen as his fiance, and if he doesn’t, what will that do to his career and Carmen’s career?

What do you guys think about all the spoilers? Are you excited for the second season of the show? Let us know your thoughts in the comments below.