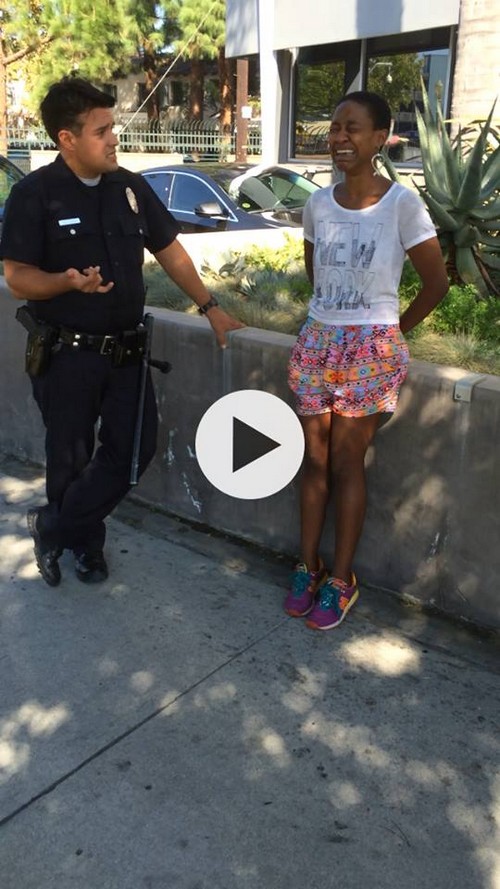 Django Unchained actress Daniele Watts has been arrested by Los Angeles Police Department, who thought she was a prostitute after seeing her kissing her white husband.  This isn’t the old days, there are interracial couples out there.

In a lengthy Facebook post she states that she and her husband Brian James Lucas were approached by two police officers when they were seen showing affection in public.  After refusing to show her photo ID when asked by police she was then handcuffed and held in a police car as the officers tried to figure out who she was. Being handles roughly by police caused her to cut her wrist.

“As I was sitting in the back of the police car, I remembered the countless times my father came home frustrated or humiliated by the cops when he had done nothing wrong. I felt his shame, his anger, and my own feelings of frustration for existing in a world where I have allowed myself to believe that “authority figures” could control my BEING… my ability to BE!!!!!!!  “, the actress says on Facebook.

She was released shortly afterwards.  Pictures were posted on Facebook of the actress crying in handcuffs.  “Those cops could not stop me from expressing myself. They could not stop the cathartic tears and rage from flowing out of me. They could not force me to feel bad about myself. Yes, they had control over my physical body, but not my emotions.”

Her husband who’s a celebrity chef went to social media to support his wife.

“From the questions that he asked me as D was already on her phone with her dad, I could tell that whoever called on us (including the officers), saw a tatted RAWKer white boy and a hot bootie shorted black girl and thought we were a HO (prostitute) & a TRICK (client).”

“They handcuffed her and threw her roughly into the back of the cop car until they could figure out who she was. In the process of handcuffing her, they cut her wrist, which was truly NOT COOL!!!”

Update: TMZ has gotten to the bottom of what really happened and Daniele Watts is completely in the wrong. Daniele was having sex in the front set of her car with the door opened when police correctly intervened. The LAPD’s behavior was fine but Watts’ was absolutely not.

The “Django Unchained” actress who claimed she was harassed and hurt by cops after making out with her boyfriend was actually having sex in her car according to witnesses … then went on a rant with cops accusing them of racism and not knowing who she was … according to police audio obtained by TMZ.

Daniele Watts had just left CBS studios in the San Fernando Valley around 2 PM Thursday. She says she was making out with her BF, but we’ve learned witnesses from the nearby Directors Guild office building told cops they were watching her and her BF have full-on sex in the passenger seat WITH THE DOOR OPEN!

The eyewitnesses said the guy was sitting in the seat, she was straddling him and it was for everyone to see. One eyewitness told cops they cleaned themselves up afterward with a tissue.

TMZ obtained police audio of the incident. Watts instantly plays the race card when Sgt. Jim Parker asked for her ID. She quickly moves from the race card to the fame card — then storms off, refusing to show her ID.

While Watts was gone, Sgt. Parker had a very cordial conversation with her BF Brian.She was apprehended by another cop a short distance away and brought back — and things got NUCLEAR!

To listen to the police audio recording of the incident click here.