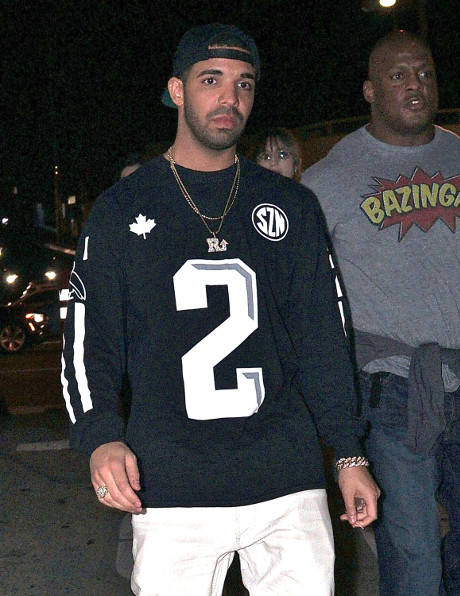 Has Drake lost all sense of pride or has he always been a whiny kid? In a pathetic attempt to deflect from his big loss at this year’s Grammys and his Rolling Stone interview, which won’t be making him any new friends, Drake now has both feet in his mouth. This boy should really just stop talking and tweeting.

While Drake was nominated for Best Rap Song, Best Rap Performance, and Best Rap Album, he came up with a big donut, losing to Macklemore and Ryan Lewis. Hmmm, wonder if that could possibly be the spoiled Canadian rapper’s reason for calling Macklemore’s text to Kendrick Lamar after the Grammys, “wack.”

In Drake’s Rolling Stone interview, he was not only miffed that he lost to Macklemore, but apparently he was upset that he didn’t get one of those nice texts from the “Thrift Shop” rapper. He obviously believed he deserved one. The text in question is one Macklemore sent to Kendrick Lamar after the Best Rap Album win. It was reported by several media outlets after Macklemore himself posted a pic of the text on his Instagram: “Sorry I robbed you,” he texted, “I wanted you to win. You should have.”

Drake actually told Rolling Stone that Macklemore “made a brand of music that appealed to more people than me, Hov, Kanye and Kendrick,” then went on to say that he felt it was wrong for Macklemore to only name Kendrick. He believed he, Jay Z, and Kanye deserved that text too. Did you ever think, Drake, that maybe Macklemore had a favorite artist that was NOT you? Maybe he wanted to send the text to the person he thought would have won, and the artist he truly wanted to win. Put your big boy undies on and stop complaining! Sorry, but the only “wack” I see here is you, a big sore loser.

If he doesn’t piss off Macklemore after that interview, he’s sure to evoke a mini war with Kanye. As reported by Rap Dose, Drake says this of Yeezus: “There were some real questionable bars on there. Like that ‘Swaghili’ line? Come on man. Fabolous wouldn’t say some sh*t like that.” Drake didn’t actually have the bravado to say that on record, and he is now very upset that what he thought was “off the record” is going to be printed as part of the interview.

And if his whiny songs and bitching about Macklemore and Kanye aren’t enough for you, Drake has had another recent tantrum. The sad, sappy rapper had apparently agreed to the Rolling Stone interview on the condition he would be on the cover. When the magazine decided to replace the planned cover with a cover of Philip Seymour Hoffman, Drake let loose in typical fashion, tweeting the following:

He went on to say about the magazine’s decision, “I’m disgusted with that. RIP to Philip Seymour Hoffman. All respect due. But the press is evil.” So, the press is evil because they accurately covered your interview, and chose to pay tribute to a deceased actor on their cover in place of you? If that is your idea of “evil” please know you have no street credibility any longer. That, coupled with your constant crying and whining, has made us all a little sick of hearing from you. Go back to being Rihanna’s doormat and writing songs about your tumultuous relationship for a while. That way you can save your tears for someone who cares.