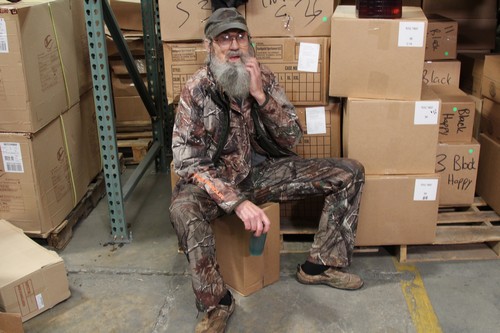 Tonight on A & E America’s most recognizable family is back for a funny, functional, and family-filled episode of DUCK DYNASTY called, “Quack and Gown.”  On tonight’s show Jase takes Reed frog hunting. Meanwhile, Korie, Jep, Jessica and Kay pull a prank.

On the last episode when the Governor of Louisiana announced that he would be coming to Duck Commander to present Willie with a commerce award, John Luke volunteered to give the introduction speech. But Willie couldn’t help but give John Luke some public speaking pointers, along with Si’s unwanted help. Meanwhile, Miss Kay enlisted Korie and Sadie’s help to pick out a nice outfit for the visit, trying to convince a reluctant Phil to give his opinion on her outfit options. Did you watch the last episode? If you missed it, we recapped it all right here for you.

On tonight’s episode, with Reed’s graduation day approaching, Jase decides to take Reed frog hunting the night before like he did on the day of his own graduation. Willie and Si join in, and Jase tries to keep them from imparting their “college advice” on Reed. Meanwhile, Korie, Jep, Jessica and Kay pull a senior prank of their own by toilet papering Missy and Jase’s house.

We will be live blogging Duck Dynasty tonight at 10PM . . . so make sure to come back to this spot and watch the one hour show with us. Make sure to refresh often so you get the most current info! While you wait for the episode let us know how excited you are about the return of Duck Dynasty.

Jase takes Reed frog hunting the night before his graduation; Korie, Jep, Jessica and Kay pull a prank on Missy and Jase.

Tonight’s episode begins with Willie asking Jase about the flack he’s getting from his wife. Jase wonders how word spread about their argument. The guys tell him he is wrong to not attend graduation. Jase has the perfect idea for a compromise. He wanted to take Reed frog hunting on graduation day, but will take him the night before so he can attend his graduation. Everyone wins. The guys devise a plan to kidnap Reed to take him frog hunting. Si is making things much worse by taking thr idea to the extreme…black bag for over the head and all. Missy agrees to let Reed go on one condition-he must be back in time for graduation!

At Phil and Kay’s house, Jep, Jessica, and Korie hang out with Kay as they look through old photos. Kay is making a special photo album for Reed. The conversation turns to “rolling a house,” and Korie cannot believe that Jessica has never toilet-papered a house so the three set out to go rolling and Kay actually even agrees to come along. The four of them head out but Jessica gets nervous that the police may spot them. She gets so nervous, she starts complaining that she needs to pee.

Meanwhile, the frog hunting trip is on. Jase wants to have fun frog hunting with his son, but also has a plan to pass on some wisdom. Willie and Si give advice throughout the trip and Jase is getting more and more annoyed because he thinks they’re both giving Reed terrible advice. As Jase tries to impart some wisdom on Reed, Si can be heard saying “Oh Brother!” in the background. Jase gets so distracted from Si’s and Willie’s comments, he forgets the points he is trying to make.

Meanwhile, at Jase and Missy’s house, Jep and Jessica start with the fountain. Kay is trying to be decorative with her toilet paper. Korie is just throwing her rolls around. Jessica starts to get the hang of it. They hear a noise from the house and run out, but then they realize Kay is still there. Jep goes back for her and tells her to run. They rush to get out before they’re caught.

Willie tries to get Si to take a hint and take off so he can talk to Jase alone. Willie tries to play psychiatrist and tells Jase his whole plans for this trip is a result of not wanting Reed to grow up and move on. Jase tells him he doesn’t know what he is talking about and completely blows off his “way-off” theory.

The boys get back from their trip as Missy is cleaning up toilet paper. As the boys speculate that Reed’s friends must have paid a visit, Missy tells them she knows exactly who did it. She tells them about the four accomplices and they cannot believe Miss Kay was involved too. Jase is very happy about the trip and doesn’t regret having their little trip.

Later Missy and Jase attend Reed’s graduation. Missy cannot believe her little boy has grown up. They come back home to celebrate Reed’s special day and share a prayer for Reed’s future before eating dinner together.