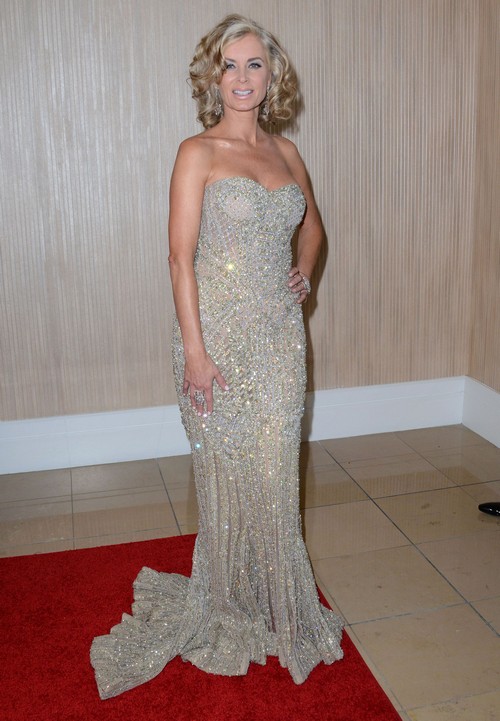 Despite the fact that Angelina Jolie is this worldwide movie star and a household name, I always forget that her father is Jon Voight. Or perhaps it’s because Angelina is such a big celebrity that I forget that her father is….not. His career and movie choices are often uninspired, and apparently, that bad taste carries over into his romantic life as well. He reportedly dated Eileen Davidson, the newest addition to the Real Housewives of Beverly Hills, and almost got married to her!

Imagine – that would have given Angelina a stepmother, and a reality star stepmother, no less. Eileen and Jon reportedly dated in the late 80s and starred together in a movie called Eternity. A source even tells In Touch Weekly, “Eileen and Jon had a very passionate relationship. She had always hoped to break away from a career in soap operas, and thought Jon could help.”

Then again, the source adds that the relationship ran its course fairly quickly, and she didn’t even get a chance to meet Angelina or her brother, James Haven. Perhaps Jon wasn’t as romantically challenged as the stories made him out to be? Granted, the fact that he even dated Eileen is a little eyebrow-raising, but back then, she was just a soap star. They worked in a movie together, but it’s also a testament to how much careers can diverge over twenty years. Jon is still a respected actor who makes crappy movies a lot, but Eileen is a now a reality star with several failed marriages behind her.

Now let’s imagine the alternate universe where Eileen and Jon did end up getting married, and Eileen was Angelina’s stepmother. You think that would have affected Angelina’s image? Or better yet, it probably would have prevented Eileen from starring on a reality show, no? But there’s also the fact that Angelina’s relationship with her father has been strained over the past few years, and adding a soap star into the mix wouldn’t have helped matters at all.