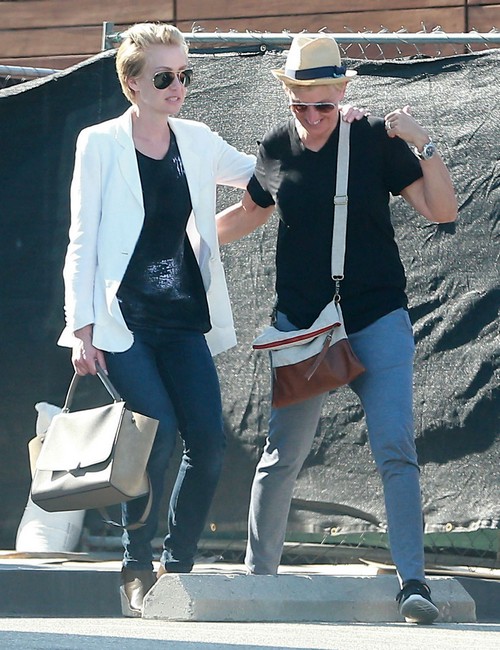 On Scandal, Portia de Rossi’s character couldn’t be more confident or conniving if she tried, but apparently, that’s far from the truth in real life. We’ve covered the deterioration of Ellen Degeneres’ marriage to Portia de Rossi pretty extensively here at CDL and exposed divorce and fighting rumors, but it seems like things have taken a turn for the worse recently.

Page Six reported a few weeks ago that Portia and Ellen had a massive fight on their way to a charity event, and they turned the car around and went back home. While Ellen and Portia were definitely not present at the event during the night of their rumored fight, their reps also went out of their way to deny the rumors. And after hearing gossip for this long, we’ve managed to stick by one truth: where there’s smoke, there’s almost always fire.

Would Ellen DeGeneres and Portia de Rossi have taken the time to deny the rumors if there was nothing there? Portia’s rehab visit, her rumored insecurity, Ellen’s rumored cheating – all this has just led to people whispering louder and louder that something is clearly wrong between the long-time couple.

According to the National Enquirer, the latest Ellen DeGeneres and Portia de Rossi fight comes over Ellen’s lifestyle company, E.D. While Ellen reportedly wants Portia’s assistance in running the company, Portia is apparently desperate to focus on her career. The Enquirer’s source explains, “Ellen is desperate to keep talk of divorce under wraps – because she thinks that hundreds of millions of dollars are riding on it. She wants to be the new domestic diva. The last thing she wants is something to go wrong. She’s convinced this will be a billion-dollar business, like Martha Stewart’s!”

You know, it’s not hard to believe that Ellen DeGeneres and Portia de Rossi are having marriage troubles, but over a lifestyle company? Portia de Rossi finally has a job that she enjoys right now [in Scandal], so I don’t think she’d begrudge Ellen her success. However – and this is a big however – Portia might once again feel like she’s being marginalized for the sake of Ellen’s career, which is reportedly what drove them apart in the first place.

Editor’s Note: What’s funny is that Hollywood celebs are cashing in on the lifestyle business and we are letting them do it! First of all, the typical celeb touting their approved brands and lifestyle is a multi-millionaire without even a basic grasp of how real people live, budget, and strive to be happy. Secondly, the divorce and cheating rate in Hollywood is approaching 80% and the children of these failed couplings (and their parents) wind up in rehab for substance abuse at more than 5 times the rate of the American population as a whole. So I have to ask people why they would ever look to celebs as a lifestyle gurus?