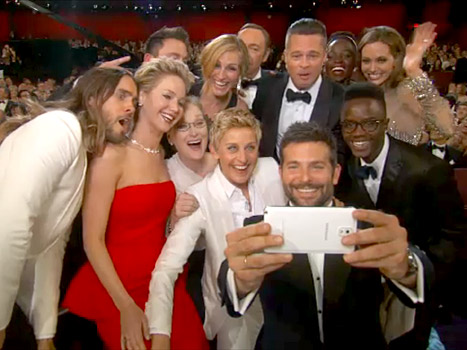 So much for that Oscar selfie being spontaneous, huh? Kudos to Ellen DeGeneres for making it come across that way, even though it definitely wasn’t. According to reports, the selfie was actually part of a Samsung Phone product placement deal. Ellen reportedly notified both Meryl Streep and Julia Roberts beforehand that they would be in the selfie, and she was also heard saying during hosting preparation that she hoped that more people would jump into the picture – and that’s exactly what happened!

The selfie ended up going viral, crashing Twitter, and breaking the record for most re-tweeted comment EVER. Considering that almost 44 million people watched the Oscars, not surprising, right? When you consider the caliber of people in that picture – Jennifer Lawrence, Bradley Cooper, Meryl Streep, Julia Roberts, Brad Pitt, Angelina Jolie, Kevin Spacey, Lupita Nyong’o, and Channing Tatum. It was like a smorgasbord of A-list stars, and the picture became instant Oscar gold. But part of the charm of the moment was that it came across so spontaneously, and now we know that was just an act.

I guess it’s hard to do real spontaneity with something like the Oscars, where there’s so much pressure to get everything right. I doubt Ellen did ANYTHING on the show that wasn’t rehearsed or discussed at least once, but I’m sure Samsung is more than happy with the results.

The Wall Street Journal even quoted an expert saying, “It was a great plug for the Samsung brand. Ellen’s selfie is going to be more impactful than their commercials. You can’t buy that magic of going viral.”

No, no you certainly can’t. Whether it was planned or not, Ellen and her selfie definitely made Oscar history, and I think it’ll be a while before that tweet’s record is broken.

Editor’s note: We obviously can’t take Ellen at her word – she is clearly capable of being manipulative as this post indicates – so why should we trust her when she says that all is well in her marriage to Portia de Rossi – better to watch what actors do, not what they say.