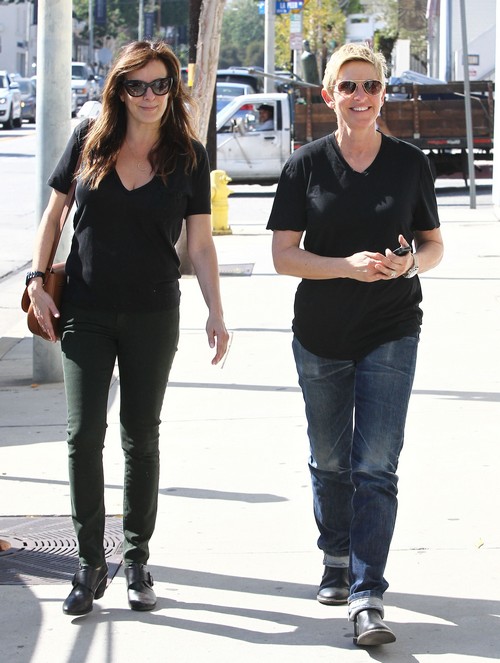 If you’re one of those people that is insisting that the rumors of trouble between Ellen DeGeneres and Portia de Rossi simply aren’t true then this story may change your mind. We have heard for a long while now that there are some serious problems in their marriage. Apparently Portia is tired of supporting Ellen’s career while feeling like she has to ask for permission to take an acting job. From the sounds of things, Ellen is a serious control freak and things have gotten bad enough between them for Portia to be spotted out in public without her wedding ring. If that was meant to send a message then Ellen has just totally thrown down the gauntlet in this war.

On Friday Ellen was spotted out walking and having lunch in West Hollywood with a mystery brunette. This photo op for the paparazzi was not an accident, but instead very purposeful. Ellen knew that she and her new friend would be photographed together and that Portia would see the snaps. She also knows better than to be seen with another woman alone, unless she wants people to talk. Obviously she felt close enough to this chick to want to be seen in public with her. She doesn’t mind if people are speculating on how they know each other and what exactly their relationship may be. Also, if something is actually brewing with this woman then Ellen’s walking with her shows her that she’s not hidden.

Any way that you look at this Portia’s head must be spinning. She has been given a visual reminder that she can easily be replaced. I guess the real question is whether or not she wants to be. Will Ellen and Portia’s marriage survive the speed bumps? Tell us your thoughts in the comments below!

Ellen DeGeneres and mystery date stop by Gracias Madre in West Hollywood, to have lunch on February 21, 2014 – business or pleasure?