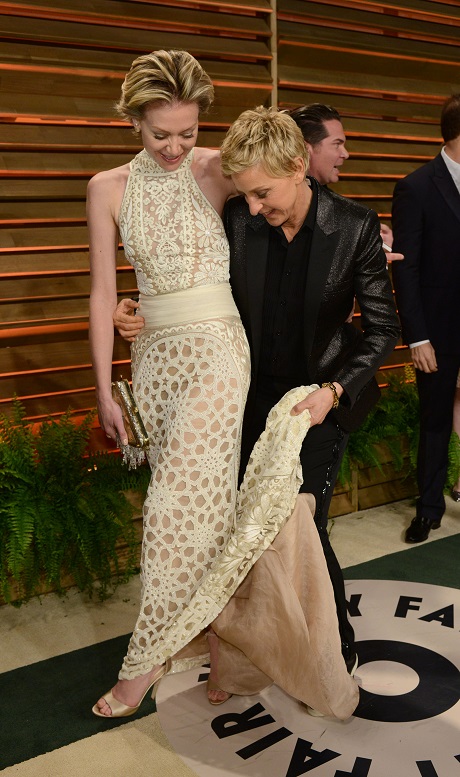 It’s really starting to sound like Ellen DeGeneres‘ marriage to Portia de Rossi is a whole lot worse than anyone realized.  We already know that Portia spent 30 days in rehab back in May after her previous addictions flared up all over again in the midst of her marital problems. After spending the better part of a decade with Ellen, she certainly has learned how to play dirty. Sources say that some of the couple’s fights are pretty epic and one shortly before rehab sent Ellen down a slippery slope.

According to the July 21st print edition of In Touch Magazine, during one bender, Portia decided to tape Ellen in action where she was attempting to dictate and control everything she should do and say. Portia purposely rolled tape in order to expose Ellen as a vicious control freak, but then she found out she smashed her phones to smithereens. Ellen didn’t stop there either. She went through her wife’s email to make sure that no other proof of her controlling ways had been emailed to anyone.

Portia is now home, clean and sober, and Ellen feels confident that she destroyed any proof of her own bad behavior — but where are these two left standing? It’s becoming more obvious that this marriage is on extremely shaky ground. Aside from substance abuse, they are dealing with trust issues and control freak behavior.

It seems like, as long as Portia lets Ellen boss her around, things between them will remain less than ideal. Do you think that Ellen will be able to loosen the reins in order to save her marriage? Can Portia stay with Ellen and continue to be sober or is she better off moving on? Tell us your thoughts in the comments below!