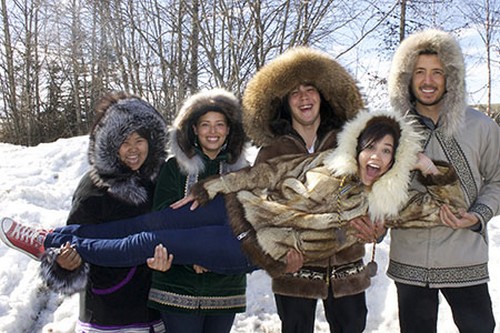 Tonight on TLC Escaping Alaska airs with a premiere episode. In tonight’s episode “Frozen Lies & Forging a New Family”, five native Alaskan youth mull leaving their villages to start new lives in San Diego, but they risk being disowned by their families and friends for betraying their heritage and trust.

For those of you not familiar with this new show, “Escaping Alaska” follows a group of young Eskimos as they leave their villages for the first time and secretly escape to San Diego, defying the expectations of their families in order to experience life beyond the harsh realities of Alaska. They are a generation torn between their deep-rooted cultural traditions and the modern pop culture of the lower 48 states. This is their story of independence, survival, adventure and forming a new family. Leaving an Inuit community for any earthly reason is the ultimate sin, so our cast members are lying about their true intentions, telling their community that they are going on a cultural/religious mission, and thus committing the highest treason.

On tonight’s episode five young Eskimos prepare to secretly escape their native villages for the first time. They must lie to their loved ones and risk leaving their families stranded during the harsh winter in order to pursue their dreams of a new life in San Diego.

Tonight on the premiere episode of Escaping Alaska we meet a group of young Alaskan natives wanting to escape their daily lives and move to warmer climates.

Nuala comes from a small town community in Alaska. She is an Yup’ik Eskimo and lately she’s been feeling dragged down by her life in her hometown. As part of her responsibilities she has to take care of her elders. It’s a custom of theirs for the young to take care of the people that once used to care for them. But despite this seemingly important obligation, Nuala wants to branch out and see the world.

However that’s to be expected with her upbringing. Nuala lives with her step-mother who isn’t from Alaska originally nor is she of Eskimo descent. So she has the support at home to go see the world for herself and she also has a father in the service. Currently her father’s job has taken him away from the village so his daughter got a chance to see her father able to leave and that might have harbored some resentment towards his circumstances. Why does he gets a chance to leave while it will be betrayal if she did the same?

It’s frowned upon for one of their kind to leave the community. If they were to return then they might found themselves shunned. By both friends and family!

Mary, an Athabascan Indian, wants to be a veterinarian one day. But she can’t do that if she stays home so this chance at seeing San Diego is a life saver. It could either help her make the choice to leave home for good or it could help her realize that maybe she wasn’t meant to leave home.

Then there’s Frank. He’s an Inupiaq Eskimo and it’s been his dream to leave his village. The only thing that stopped him was the fact that most of his money went towards supporting his family and keeping his house heated. Though, unlike the girls mentioned earlier, he doesn’t appear all that afraid about dealing with irate relatives. So maybe it’s different with guys.

Tamara is also an Inupiaq. She grew up in a very matriarchal style kind of family. The women in her family are called the glue. But Tamara wants to be more than that. She dreams of becoming an actress like Jennifer Lawrence albeit the Eskimo version. And seeing as she couldn’t use education to escape (school wasn’t her thing); she met up with up the other natives and planned a joint trip down south.

But Frank accidentally let someone in on their secret. He told a friend believing she wouldn’t tell anyone and what she ended up doing was telling a guy nicknamed “Q”. Q is an Inupiaq. He grew up among shamans and has had his own experience in dealing with the supernatural. Yet when he heard about the trip the others were planning – he invited himself along.

It’s not like they could have turned him away what with him knowing their secret!

And so the group (with its newest addition) all set out to leave. Although it should be known that they did at least give their families some prior warning. Too bad those very same reasons they gave their families were pretty much lies. Mary and Frank both said they wanted to look for work. Though they left out the part about looking outside of Alaska and not merely in the next village.

Tamara was a little more honest. She told her family that she wanted to be an actress and then lied about having found a part in another village. Her parents didn’t want her to go and were going to refuse her but her grandmother stepped in and swayed the negative opinions.

As for Q and Nuala, they told their families the truth about everything. They knew they could admit they were going to the lower 48. Sure, their mothers were upset but they weren’t vehemently discouraged from going either.

However leaving wasn’t as easy. Mary’s community threw a going away party for her. And it made her feel guilty about lying to them. They didn’t know what her real plans were. Each of these innocents really already have family members worrying about life in a different part of Alaska so how will their families feel and/or react when they learn their children skipped off to California?

And will California really be worth it?