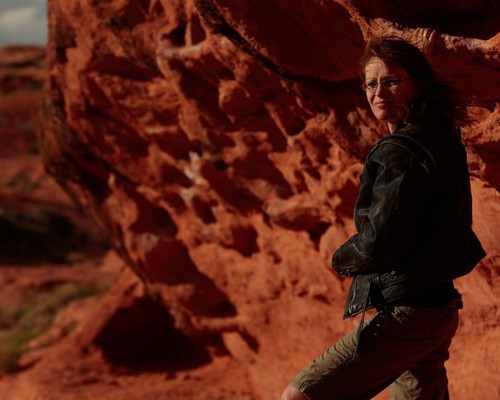 Tonight on TLC their new reality show ESCAPING THE PROPHET airs with a new episode called, “Fighting for Freedom.”  On tonight’s episode Flora risks her life to help a whistle-blower who has accused her father of abuse in the past but is afraid of leaving her estranged daughter behind.  Did you watch last week’s premiere episode?  We did and we recapped it right here for you.

On last week’s episode Flora returned to the infamous FLDS town of Colorado City to help Lenora, a single mother, escape with her six kids. Lenora was prepared to leave, but her heavily indoctrinated children refused to follow, and even attempted to undermine plans. Flora Jessop escaped from the FLDS many years ago. Now, her mission is to help others get out and start a new life.

On tonight’s episode Flora risks her life to help Ruth, a known FLDS whistleblower who has reported instances of abuse, even by her own father. Ruth is ready to leave, but worries for her estranged daughter. Can Flora convince Ruth to escape before the FLDS’ threats escalate?

Tonight’s episode of Escaping The Prophet opens with Flora Jessop receiving a phone call from Ruth, a member of the FLDS. Flora is working to help her run away from the Fundamentalist religion, she has known Ruth her whole life. Ruth has spoken out against the FLDS, and now she has become their target. Flora heads to her Aunt Jenny’s house to meet with her friend Brandon and discuss getting Ruth out of the FLDS.

Flora gave Ruth a camera to document the FLDS members abusing her. They told Ruth if she shows any of the camera footage to Flora they will kill her. Ruth calls Flora in a panic, because the FLDS has stolen her house keys. Brandon and Flora head to the store to get some new locks, and then head to Ruth’s house to help her change her locks.

Brandon and Flora are en route to Ruth’s house, but Ruth isn’t answering the phone. They are scared that the God Squad has gotten there before them. They arrive at Ruth’s house and no one is home. They finally find her walking down the road towards them, and she is safe. They get started on her locks on her door. Ruth reveals to them that she reported to the county that the FLDS has threatened to kill her. They have always had it out for Ruth because she is one of the first members of the FLDS to successfully press charges against someone for sexual abuse.

Flora’s brother has come over to Ruth’s house to help them get rid of Ruth’s “sensitive documents” and some FLDS propaganda like photographs of Warren Jeffs. Flora explains to her sister-in-law that Ruth has decided to leave the FLDS because they have beat her so badly she now has a spinal injury.

On the way home Flora confides in Brandon she has “a really bad feeling” about Ruth and the FLDS. She is desperate to find her a safe-house and get her out of there.

Brandon and Flora are looking through some of Ruth’s paperwork that they took from her house yesterday. They find a journal full of confessions that Ruth wrote to send to Warren Jeffs. They also find a letter from Ruth to her son Cody, telling him how much she misses him. The FLDS took her children away from her.

Brandon and Flora head to Ruth’s house and pick her up to go on a hike and talk. They are excited to see that for the first time in her life Ruth is wearing pants, and not following the FLDS dress-code. Ruth jokes that she is “wearing a disguise to protect her form the Polygamists.” Flora has invited her friend Pam to join them, she also escaped from the FLDS and she wants Ruth to have someone to relate to.

After their hike, Ruth reveals that the reason she has stayed in the FLDS is because she wants to know where her daughter is. She was taken from her when she was just one year old, and now she is fifteen years old. Ruth is scared that the FLDS is holding her captive somewhere. Flora is scared that Ruth is going to change her mind at the last minute and choose to stay at the FLDS.

Flora has found a safe-house for Ruth. There is women in the West that is looking for a companion and someone to help her out on her farm. Flora calls the potential host, and lets Ruth talk to her on the phone. The host agrees to let Ruth come stay with her, she has a few days to pack her stuff up, before she will fly to the safe-house.

Brandon and Flora have Ruth all packed, Brandon is calling the airport to book her a flight. It’s almost time for her to leave, Flora gives her a call to make sure she is okay. Ruth is feeling a little sad, but she is ready to leave the FLDS in the morning.

Extraction day has finally come. Flora and Brandon head to Ruth’s house to pick her up and take her to the airport.

Flora and Brandon arrive at Ruth’s house, and God Squad is circling their car. They get Ruth and her bags safely into the car, and they head towards the airport. Ruth reveals she isn’t even sad to leave the FLDS, she is excited to start over and build a safe place for her children to come to.

Flora and Brandon see Ruth off at the airport, as she boards her plane and flies off to her new life.