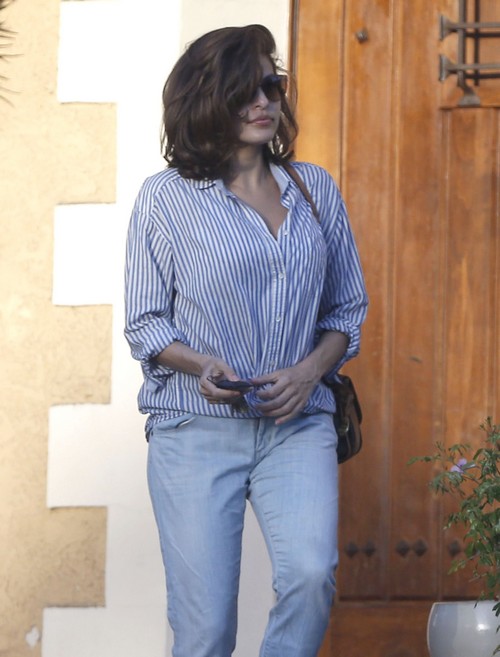 Multiple sources have confirmed that Eva Mendes has given birth to a baby girl and she and Ryan Gosling are now parents.  They welcomed a baby girl, whose name has not yet been revealed, Friday September 12th.  The first pregnancy rumors began in July, Mendes has always kept her personal life out of the spotlight so no one was for sure if the rumors were true.  She even made an appearance on the Ellen DeGeneres Show and laughed at the pregnancy rumors. Back in February she said, “It’s so ridiculous.” It all started because I didn’t want to go through the scanners at the airport. You know those X-ray scanners, which are really creepy? They basically see you naked, right? And not only that, but there’s a radiation aspect to it, so I always opt out.”

During Eva’s pregnancy, Ryan Gosling was the perfect boyfriend running errands and going grocery shopping.  An insider told US Weekly, “Ryan goes out and gets the groceries, [Eva’s] been wanting pasta, and he’s cooking her meals. Ryan has already stepped into the role of caring father-to-be.”

Mendes’ last red carpet appearance was at a Violet Grey dinner honoring the late Elizabeth Taylor in L.A. on Feb. 26. After her pregnancy news began to swirl, she did everything imaginable to cover up her baby bump.  On June 10th she used lots of clothing and a large bag while leaving a parking structure in L.A.

Mendes, 40 and Gosling, 33 started dating in fall 2011 after they co-starred in The Place Beyond the Pines. Later that year, Gosling told UK newspaper The Times that he would like to continue making movies, until he makes babies saying, “I’d like to be making babies but I’m not, so I’m making movies,” he told the U.K.-based paper The Times that September. “When someone comes along, I don’t think I’ll be able to do both and I’m fine with that. I’ll make movies until I make babies.”