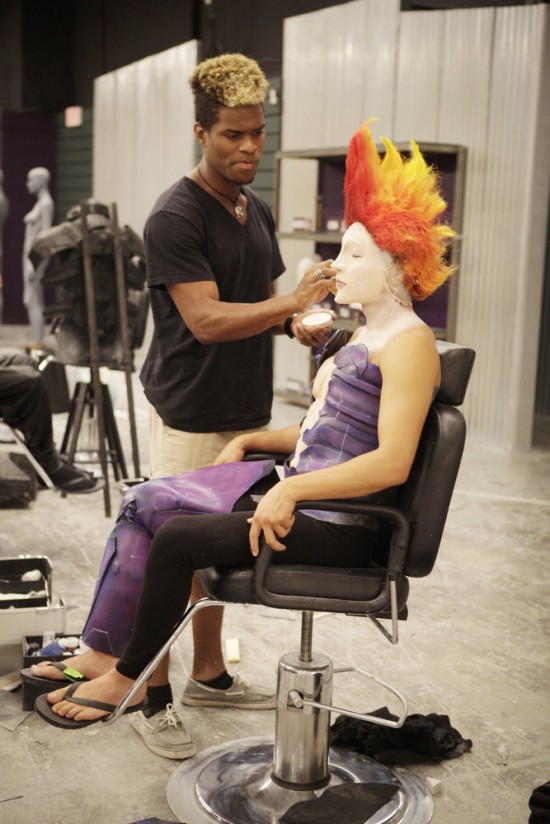 Syfy’s smash hit and acclaimed unscripted series FACE OFF continues with a new episode tonight called, “Ego Trip Abroad.”  On tonight’s episode a trip to Tokyo is followed by two extreme challenges inspired by the ancient culture of Japan.   Did you watch last week’s episode?  We did and we have a recap right here, for you.

On last week’s episode Wands provided inspiration for wizard characters created by the remaining nine contestants.  The had to summon a wizard to help them out.  The winner of the night was George. George, Tyler, and Corinne went back to the make-up room. Chloe, Cat, and Niko were in the bottom and one went home. Cat was eliminated.

On tonight’s episode a trip to Tokyo is followed by two extreme challenges inspired by the ancient culture of Japan.  The remaining up-and-coming special effects make-up artists are all all eager for the opportunity to achieve success in the competitive special effects makeup field and will bring their A Game tonight.

Face Off season 6 episode 8 airs at 9PM on SYFY and we will be live blogging it with all the up-to-the-minute details. So make sure to come back to this spot and spend the evening with us!  Make sure to refresh often to get the most current details and updates!

Tonight’s episode opens with the team of artists in Japan, first visiting a fish market. They visit a Japanese garden next, and walk around, taking in the beauty of the scenery. They enjoy a little nightlife before heading back to get ready for their big day. The next morning they are welcomed to the “Land of Perfect Bliss.” The team is fortunate to meet a world-renowned guest judge Kazuhiro Tsuji. They are presented with their challenge of creating an Oni which is described as a form of youkai or spirit/demon. They have two hours to create their character.

George is criticized on the tears he created as they don’t look like falling tears. Daran used excellent color and is praised for it. Rashaad had a full story behind his character but they did not like his brush stroke. Corrine did a great job on the color. Daran wins the day’s challenge. He is granted immunity from the spotlight challenge…which requires the artists to create an alter ego anime character.

The next day, the team soaks in the culture and tries to gain ideas for the challenge. The artists begin sketching their characters. They get some advice from an expert in anime and head back to the lab. They have 3 days. The artists begin sculpting. Tyler’s character has multiple arms for multitasking! Chloe’s solstice character had a close match in hair color. Corinne finds out that her design is very similar to Chloe’s. Corinne is focusing on the little details to set her design apart.

Rashaad looks adorable as he tries on the hard plastic wig Tyler is using for his design as the artists joke around. Chloe’s character has some large violet eyes. George is worried his design is not coming off like he wanted.

Application day has started. Corinne is focusing on the eye placement and that her model can see through them. When the 15 minute mark is called, everyone is starting to panic. Chloe gets hurt as she is running around and her lip is bleeding, her model is not fully painted, and she is stressed out big time.

Judging day is here and everyone rushes to finish up. One artist will be eliminated tonight. McKenzie introduces the judges Glenn Hetrick, Ve Neill, Neville Page, guest judge Kazuhiro Tsuji. Chloe’s design is first and is definitely lacking. The shape and color seem off. Daran’s koi fish look is unbelievable. The eyes are perfect and color is spectacular. Corinne did an excellent job on the eyes. She is pleased with her work. Tyler’s alter ego design could be his twin they look so much alike!

Daran: The attention to detail is gorgeous. They like that he worked with an animal form as his alter ego. Perfectly executed. Great sense of proportion. The scales and paint job were so nicely done.

Graham: Looks like a reject from a poison ivy lab. Looks like you ran out of time. Only the hair looks anime. Could not see any facial expression because of goggles. No Japanese feel.

The winner of the challenge is Daran. Graham was eliminated….but wait!

The judges tell Graham they are sad to see him go because they know he is capable of more. This, they say, is the reason they are granting him immunity and allowing him to stay. It was the first time the judges have done this, so it gives Graham the push he needs for the next challenge.