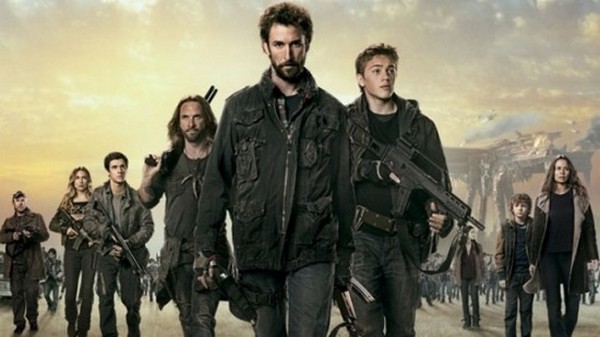 Falling Skies returns tonight on TNT with a new episode at 9PM EST called “Exodus”. On tonight’s episode, The 2nd Mass orchestrates a complex scheme to escape from the Espheni Ghetto. Meanwhile, Maggie confronts Lexi in Chinatown; Matt tries to dissuade Mira from taking part in a risky escape plan; Anne has a flashback about her time in the Espheni Tower.

On the last episode the Espheni revealed their new plan to Tom, and he was faced with an impossible decision. Meanwhile, Weaver and Pope investigated a way out of the Espheni prison, while Matt struggled to hide his true allegiance from the “Team Leaders” at the Espheni Youth Camp. Elsewhere, Anne lead an exhausting search for her daughter Lexi, while Ben’s concerned about Lexi’s increasing powers uncovered a devastating secret she had been keeping. Treva Etienne and Robert Sean Leonard guest-star. Did you watch the last episode? If you missed the episode we have a full and detailed recap, right here for you.

On tonight’s episode Tom and the 2nd Mass hatch an elaborate plan to escape the confines of the Espheni Ghetto. Meanwhile back in Chinatown, after learning from Ben that Lexi has been keeping a deadly secret, Maggie confronts Lexi publicly. At the Espheni Youth Camp, Matt tries to talk Mira out of a dangerous escape plan. While trekking through the woods with her guerilla fighters, Anne has a flashback to her time in the Espheni Tower with Karen (guest star Jessy Schram), where a terrifying secret about Lexi is revealed. Treva Etienne guest-stars.

Tonight’s third episode of season four of Falling Skies is going to be great. You’re not going to want to miss a minute of the action and we’ll be recapping it live for you as well. While you’re waiting for the episode to begin hit up the comments and tell us your thoughts about the show.

Anne continues her search for daughter Lexi, with the help of her crew. Anne faints and has a flashback of when she was a captive of Karen’s while imprisoned on the mothership. After collapsing, her vision into the past reveals Karen hooking up her pregnant belly to the Overlord through an umbilical cord. When she wakes up she feels that Lexi is close by. Meanwhile in Chinatown, after learning from Ben that she met with an Espheni, Maggie confronts Lexi armed with guns and anger. Maggie is not as understanding as Ben and feels she was deceived by Lexi, who she now feels is conspiring with the enemy. The two confront Lexi as she is teaching and are interrupted by Lourdes’ defense of Lexi. Maggie is not going to hold back and does not step back. Lexi admits to what Ben and Maggie already knew, but offers a peace-and-love type explanation, but Maggie is not buying it and draws her gun, only to end up with a broken wrist after Lexi’s effort to make Maggie get rid of her guns as they threaten the peace. Meanwhile, Anne finally makes it to Chinatown and meets up with Ben, Lourdes, and Lexi…and immediately recognizes her daughter.

At the camp, Sheila receives praise from Kent for her loyalty. Kent plays host to the parents who are visiting, sharing his vision for a better world. Mira hatches a plan to escape, only to have Matt desperately try to talk her out of the dangerous act. Mira steals and hides cutters that she plans to use to escape the camp later. After a bed check by Kent in the morning, the cutters are found underneath an empty bed…right where Mira hid them. Matt immediately confesses, not wanting Mira to confess or be punished. Matt is taken away by Kent’s crew, and is seen and recognized by Cochise.

Tom plans an escape from the Espheni Ghetto. Tom and the others discuss the plan to destroy the laser fence using the Faraday suit. The suit will cancel the fence’s electrical current, giving them enough time to get over the fence. The plan is to have Dingaan don the Faraday suit, while Tom leads the skitters to an ambush, giving Dingaan the time he needs to get over the laser fence. Hal will then lead everyone through the sewers While Tom’s plan may sound good for everyone, Dingaan has the most to lose and is worried about what will happen if it does not succeed as planned. Pope is skeptical as well and not happy that Dingaan was chosen instead. Tom meets with the Overload as part of the plan. After Tom is able to trick the overlord, all skitters are ordered to go after Tom. While that plan is in action, Dingaan prepares for his role, but is injured after a pipe breaks his wrist. Pope ends up taking over the task and immediately takes over to wear the Faraday suit. Pope drops the bomb just as he reaches the top, falling on to the wrong side of the fence. Pope must retrieve the bomb and is forced to reclimb the wall. Pope is knocked out after the suit cannot seem to take what has happened, but thankfully he wakes up and blows the tether. One strand remains and the fence is not yet down. He takes an ax to the final strand and finally knocks it down. Meanwhile, Tom runs into the prison as planned and burns the skitters. He blows up the building as Hal ushers his people through as planned. Just as they feel the relief and congratulate one another, Weaver steps away from the celebration and looks up at the hill where he seems to have seen something, saying only that he believes he heard something when questioned by Tom.