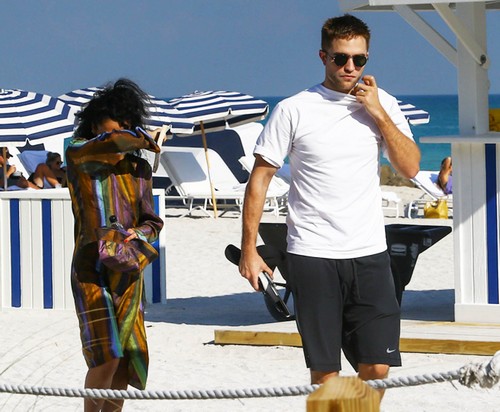 According to an inside source, Kristen Stewart is under a ban by FKA Twigs. Robert Pattinson is forbidden to mention KStew or Twilight or to even suggest that RPatz still thinks about his former girlfriend. As much as we call FKA Twigs a giant, famewhoring user, it’s gotta be annoying to constantly be compared to your boyfriend’s ex-girlfriend in the media. Kristen Stewart and Robert Pattinson dominated the media waves for the entire duration of Twilight – and for a couple of years after that – and now that FKA Twigs has officially come out as Robert Pattinson’s girlfriend, she’s dealing with the repercussions of fan bias.

Now, one particular aspect of this whole love triangle situation that’s always been interesting is that although Rob moved on from Kristen Stewart fairly quickly [at least with the rebounds], Kristen has been single and stayed single for two years. She hasn’t dated a single person since her breakup with Rob, and from what we’re hearing, it’s because she thinks there’s a chance that they’ll get back together in the future. She doesn’t know whether it’s a big chance or a minuscule chance, but she does believe that there’s a chance – so long as Rob gets tired of FKA Twig’s famewhoring and dumps her ass.

However, that’s never going to happen if FKA Twigs has any say in the matter. Apparently, FKA is fully aware of what Kristen is doing, and not only that, but she’s sick and tired of being used in the same sentence as Kristen Stewart every time a tabloid mentions her name. Sure, it sells to the public and especially to Twi-hards, but FKA Twigs wants to leave the ghost of girlfriends past in the past, and not keep rehashing it over and over again.

As such, according to our impeccable sources she’s told told Rob to cut off all contact with Kristen, and she’s trying to put in a media ban on anything to do with Kristen whenever she’s around Robert Pattinson. Our exclusive source said “FKA Twigs fears and loathes Kristen, Rob knows this and makes sure not to upset his new girlfriend.” So basically, no movies starring Kristen, no conversations mentioning her name, and no discussing anything to do with Twilight. I mean, it’s polite for a boyfriend not to mention his ex-girlfriend that often any way, but this way, there’s no question about where his loyalties lie.