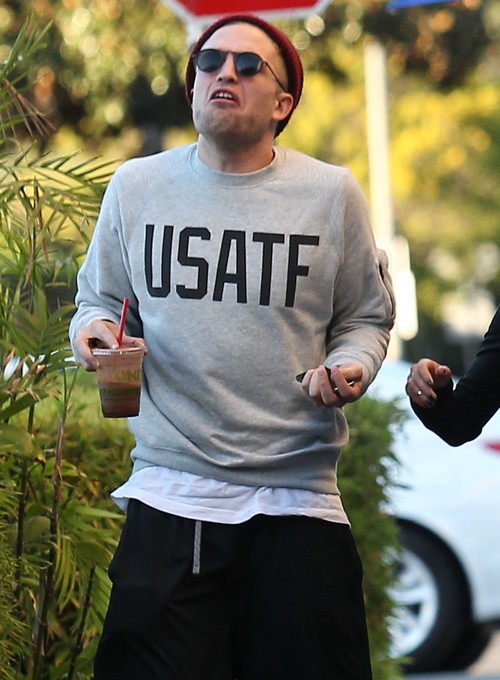 Robert Pattinson and FKA Twigs continue their ridiculous PDA tour of America in Miami during which the once great Twilight RPatz behaves as a pathetic mascot. FKA Twigs must be missing the shame gland from her body (like Kristen Stewart!), because I don’t know how else to explain how recklessly and shamelessly she’s been using Robert Pattinson for the past two months. Before FKA Twigs started dating Robert Pattinson, she could barely get 200 people to come to her obscure concerts, but suddenly [with no discernible change in talent or musical style], she’s giving interviews to Rolling Stone, being featured on the Today Show, and selling out concert venues with thousands of seats? Yeah, it’s not a coincidence. And for his part, Robert Pattinson seems proud and happy to be displayed as a sophomoric pussy-whipped mascot. Pathetic!

Look, it’s understandable that FKA Twigs would take full advantage of any and all opportunities that came her way, because she’s been struggling to make a name for herself for some time now. And she’s not untalented, per say, but Rob’s connection is definitely making her a lot more famous than others with her skill set, looks, and talent. Obviously, Hollywood – and the music industry – is all about who you know and who you bang, and nobody’s proving that better than FKA Twigs.

I will say this: FKA Twigs and Robert Pattinson do seem like they have feelings for each other, so it’s not a purely bearding relationship. Rob is getting a relationship out of this arrangement, and FKA Twigs is getting to use one of the most famous celebrities in the world as her arm candy.

For example, FKA Twigs and Robert Pattinson were spotted at Art Basel in Miami, and you literally could NOT miss them – even if you tried. FKA Twigs was there for a talk as part of the shoot she did for Surface Magazine, but if you were there, you would think that she came solely to show off Robert Pattinson her arm. PDA? More like excessive PDA with cherries on top. Get a room, already. #FamewhoreCentral.