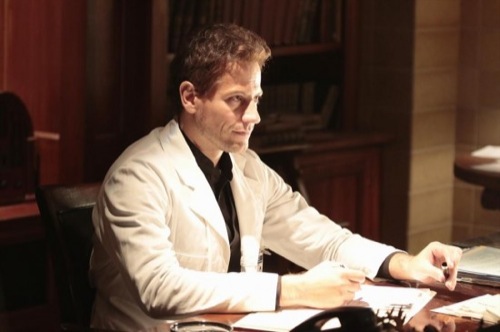 Tonight on ABC their new show Forever continues with an all new Tuesday October 14, season 1 episode 5. On tonight’s episode called, “The Pugilist Break” a community activist dies from an apparent drug overdose.

On the last episode the death of Gloria Carlyle, the elegant, seemingly ruthless matriarch of one of New York’s wealthiest and oldest families, brought a world of hurt down on her family. After Gloria was found dead at a Metropolitan Museum of Art gala celebration of her philanthropy, Henry ran through a variety of suspects and motives but was pulled from the case when the family demanded faster answers. Abe assisted Henry and Jo entering the family’s estate sale for important clues through his antique connections. Meanwhile, Henry was tormented by the haunting and melancholy memories that this particular art museum holds for him when it came to the love of his life, Abigail, and their ironic personal history with Gloria. It all called into question, what would you do for love? Did you watch last night’s episode? If you missed it we have a full and detailed recap right here for you.

On tonight’s episode, what looks like a drug overdose death of a reformed junkie-turned community activist results in Henry and Jo tracking a murderer. The complex investigation involves dirty dealings between a real estate developer and a community organizer with millions of dollars at stake. Henry flashes back to the same 1890s New York tenement where he worked as a doctor to help the poor, including an orphan boy who gives him a special handmade gift. Meanwhile, Abe cooks up a Sunday dinner feast for Henry, Jo and himself. When Jo tries to find out how the two men know one another, Henry weaves an elaborate tale to cover the truth.

Tonight’s episode is going to be another great episode, which you won’t want to miss. So be sure to tune in for our live coverage of ABC’s Forever Season 1 episode 5 — tonight at 10PM EST!

Tonight’s episode of Forever kicks off with a boxer named Raul working out in the gym, his mentee asks him what his problem is, he says he has a lot on his mind. Three days later a real estate agent and is giving Wendell and his wife a tour of an apartment in the ghetto, they are mortified when they find a decaying bottle in one of the rooms.

Jo arrives at Abe’s store and says that she has been trying to find Henry, he really needs to get a cell phone. Henry and Jo head to the apartment where Wendell and his wife found the decaying body. They walk past the little boy that Raul was mentoring on the front steps. Henry checks out the body and says that he has been dead about three days, and his body has been moved. He also has a laceration on his head, which is strange since he supposedly overdosed.

They take the body to the morgue and after Henry’s investigation he reveals that the body is Raul Lopez, and he died from blunt-force trauma to the head. His killer injected heroin into his arm after he died and missed the vein.

Henry thinks that if they figure out the chemical make-up of the heroin, they will be able to determine which dealer it came from, and the dealer can lead them to Raul’s killer. He takes Lucas back to the building where they find Raul’s body and tells him to catch all of the rats running around because they were feeding on Raul’s body and may have ingested some of the heroin in his system. Henry heads outside and finds a drug dealer and informs him he would like to buy some heroin. Right after the sale two patrol officers bust henry for buying heroin, and drag him to the police station. He has to explain to Jo and Lt. Reece that he wasn’t going to use the heroin, it was strictly for research purposes.

The next day Jo and Henry sit down with Raul’s girlfriend, she assures them that Raul didn’t do drugs anymore, and after he got out of prison he started working at the rec center and mentoring kids. She insists Raul had turned over a new leaf and they were going to be married in the spring. She also reveals that the night before he went missing he was arguing on his phone with someone, Jo and Henry are confused though because they didn’t find his cell phone with his body.

Jo heads to the gym and talks to one of Raul’s co-workers named Damian. He insists that Raul didn’t have enemies, everyone loved him. Damian says the person that Raul was fighting with on the phone is Tommy Delroy, a millionaire who is buying up all of the property around the rec center to build condos, and he informed Raul that he was going to tear down the rec center too.

Henry sees the little boy that was with Raul in the gym before he went missing, he sits down with him and tries to ask him about Raul but the little boy storms off and tells him to “forget about it.”

They found a lottery ticket with Raul’s body, so they head to the bodega where he bought it. The store owner says that Raul loved his neighborhood, but he has had enough of it. He sold his store to Thomas Delroy. Across the street they notice a construction site, with the same wet cement that was on the bottom of Raul’s shoes. They head across the street and Jo calls Raul’s cell phone number, Henry can hear it ringing underneath the cement that was just laid. He proceeds to dig it up and locates Raul’s phone. Mr. Delroy arrives and demands to know what the hell is going on. Jo presses redial on Raul’s phone and ironically Delroy’s phone in his pocket starts ringing.

They bring Delroy in for questioning, he insists that he doesn’t know Raul and crazy people call him all of the time and complain about his real estate projects. They have no choice but to cut him loose, one phone call doesn’t mean that he killed Raul. Jo runs a background check on Delroy’s employees and learns that Lou, the man that didn’t want them to dig up the phone, used to do muscle work for the mafia.

Henry and Jo decide to follow Lou, and see him picking up a package from Delroy, they follow him and watch him take the package inside the rec center where Raul used to work. After Lou leaves the rec center they rush inside to investigate and find out that the package was full of cash and Lou left it inside Damian’s locker.

Jo and Henry pick Damian up and bring him in for questioning, they take him to the morgue and show him Raul’s dead body – he swears he didn’t kill him. He insists the money that Lou and Delroy gave him was a bribe to convince the people of the neighborhood to let them tear down the rec center. They decide to put a wire on Damian and have him go talk to Delroy and see if Delroy will confess to having Raul killed.

While Damian is talking to Delroy, Henry sees the little boy that Raul mentored playing outside with a ball, he realizes that the ball left the same marks on the wall that it did at the crime scene and puts two and two together and realizes the little boy was there when Raul was killed. The little boy tells Henry that he can’t talk to cops and races off on his bike.

Henry is sure that the little boy was scared to talk to cops because Lou and Delroy were watching. They pull Lou over and realize Henry isn’t with him. That’s when it dawns on Henry that the little boy wasn’t afraid of Lou, he was afraid of the Bodega owner standing next Lou. They rush back to the neighborhood Bodega and find the owner in the basement holding the little boy at gunpoint. Jo pulls her gun on the store owner and he races upstairs and out the store, Henry chases him and runs outside just to see him run down by a dumptruck. Henry rushes to his body and pleads with him to confess that Delroy put him up to the murder, but he died without offering up any information.